Alice McDermott Talks About Death, Dying and Being Irish 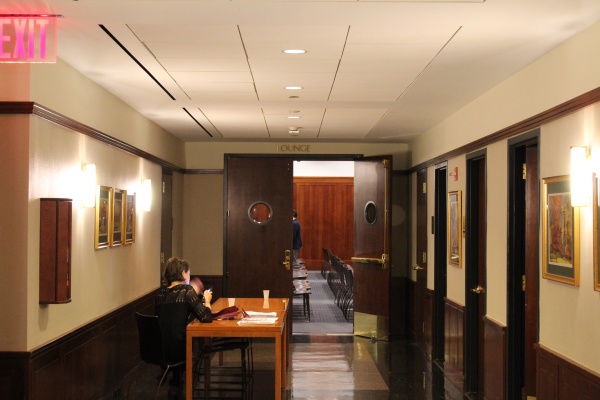 On Thursday, Oct. 16, the Fordham Center on Religion and Culture hosted writers Alice McDermott and Thomas Lynch for a literary discussion, or as Director of the Fordham College on Religion and Culture, James P. McCartin, called it in his opening remarks, “a conversation between the two very best people I could think of to discuss our mortal end.”

The event, titled “Unto Dust: A Literary Wake,” was a conversation between the two writers on death, dying, and the concept of a “good funeral,” as Lynch referred to it throughout the evening, both in literature and in life.

McDermott, the author of seven books, has been a three time finalist for the Pulitzer Award, and has won both the National Book Award and the American Book Award for fiction for her 1998 book, “Charming Billy.”  More recently, her book “Somewhere” was published in 2013, as well as “These Short Dark Days,” which was published in the New Yorker.  She is also the Richard A. Macksey Professor at the Johns Hopkins University, where she teaches creative writing.

Thomas Lynch is a poet and essayist, with his publications including his 1997 collection of essays, “The Undertaking: Life Studies from the Dismal Trade,” which won the Heartland Prize for nonfiction and the American Book Award, and was a finalist for the National Book Award.  He has recently published “The Sin-Eater: A Breviary,” a book of poems.  He is also the proprietor of Lynch & Sons Funeral Director, a family business in eastern Michigan.

The evening began with opening remarks from McCartin, who set the mood with the statement “Where else except at a good funeral are we expected to have truly complicated and emotional responses,  sadness or even devastation mixing with joy and consolation and reconnecting with old friends,  anger at the shortcomings or tragic turns of a life, hinged with a dose of gratitude that may just make way for forgiveness or acceptance.”

Before handing the program over to McDermott and Lynch, McCartin said to the audience “You will be moved, if not to cry, then certainly to laugh, and maybe you’ll even be moved to go to a good funeral tomorrow.”

Surprisingly, despite the morbid nature of the discussion’s topic, the audience was frequently moved to laughter, due to the authors light hearted jokes about death and their Irish ancestry, such as Lynch’s statement that the Irish “are very good around corpses.”

Although the authors’ discussion frequently elicited laughter, a melancholic attitude of longing for the better days of the past clung to the air throughout the event, as they discussed death, funerals, their lives, and their literature.

“If we speak of the afterlife, it is either with vague piety, or cautious facetiousness, tentatively suggesting reunions with loved ones and somehow no longer annoying relatives,” McDermott said regarding how people deal with death in society today.  “I begin to wonder if it’s not death that we are reluctant to acknowledge here in the 21st Century, but the awkward outlandishness of the notion of eternal life.”

Similarly, Lynch stated that  “as a culture and as a community of faith, we have lost our eschatological nerve,” frequently criticizing current funerary practices and reminiscing on the seemingly bygone time of the “good funeral.”

“The stories we tell ourselves about what happens when we die have lost their sinew and certainty and assurances and this is why you may have noticed we have replaced the ‘good funeral,’ which used to be a sort of one-size-fits-all liturgical event during which we would say aloud the things we believe as a culture and thereby embolden the normally shaken faith of the bereaved,” Lynch said.  “We’ve replaced that with a celebration of life, where the life being celebrated is the one that belonged to the corpse, and because the narrative on which we usually use to upend these beliefs has gotten shakier and uncertain.  Now we use a narrative that probably fits best into the term ‘funeral karaoke.’”

“The funeral has become a steady estrangement between the living and the dead,” Lynch continued.  “How long it will take to restore us to a sort of order about our obligations to the dead?”

This sentiment was echoed later on by McDermott when she said “In contemporary culture, there is a fear of gravitas and of the grave, both literal and figurative.”

Along with these sentiments came parts of the discussion geared towards older generations, which made up a majority of the audience.  Lynch frequently stated “our generation,” gesturing to the audience, while McDermott questioned “I hear a younger generation who are not maybe as accustomed to the customs of death saying’ no, the way we do it is much less morbid and we get over it and here you guys are sitting around talking about death all the time.’  What do we say to that generation of what gets left out? What gets lost in the rush to be comforted?”

Unfortunately, the evening also came with some slightly awkward moments mixed in with the melancholic reminiscence and the discussion about their respective works and lives.  When asked about the concept of the resurrection of the body, McDermott called the concept “bullshit,”  similar to her calling of other beliefs “outrageous,” such as that of the afterlife, throughout the discussion.  This remark was met by laughter, but one could not help to notice a feeling of tension arise as religious beliefs were brought up and questioned.

This awkwardness caused by the melancholic atmosphere and criticisms of the current beliefs and funerary practices came to a climax at the end of the event, when a small elderly woman raised her hand and spoke quietly but with purpose, and said “there is grace there, and you just need to be patient until it comes to you,” which was followed by a moment of silence from the two authors and applause from the audience.

The next event by the Fordham Center on Religion and Culture will be “Our Planet’s Keeper?: The Environment, the Poor, and the Struggle for Justice” on Tuesday, November 3 at 6 p.m.  The panel will feature, according to the center, “Cardinal Oscar Rodriguez Maradiaga, SDB, Archbishop of Tegucigalpa, Honduras, and former President of Caritas Internationalis, a global confederation of Catholic humanitarian organizations; Jeffrey Sachs, Director of the Earth Institute at Columbia University and Special Advisor on Millennium Development Goals to the United Nations General Assembly; and Joan Rosenhauer, Executive Vice President for U.S. Operations of  Catholic Relief Services, and former Associate Director of the Department of Justice, Peace, and Human Development for the U.S. Conference of Catholic Bishops.”