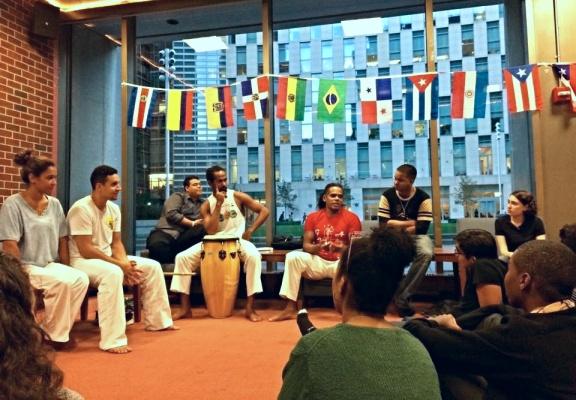 Hispanic Heritage Month is celebrated in the United States starting Sept. 15th through Oct. 15th. The Student Organization of Latinos (SOL) at Fordham Lincoln Center held a series of events to honor this tradition, which were open not only to club members, but to all students.

The first scheduled event was an outing on Oct. 5th, to Patacon Pisao, a restaurant that serves authentic Venezuelan cuisine. “Think of a hamburger, but instead of hamburger buns, put plantains on it,” said David Bernard-Santana, FCLC’18 and vice-president of SOL. The other events were Taco Tuesday,  where students were treated to tacos and board games specific to Latin American culture, followed by a Capoeira class the following day, where students were instructed about the Brazilian martial artform itself, as well as the way of life that it implies.

“My favorite event would would have to be Taco Tuesday,” said Sahcha Pierre-Louis, Gabelli School of Business(GSB) ‘18 and an active member of SOL. “I mean who doesn’t love tacos, a good time with friends, and some mexican jams?”

Bajo El SOL, the dance that concludes the week of events and the club’s biggest event of the semester, was held in the Atrium, near the Ram Cafe. Daniel Alvarez, FCLC ‘19, the event was a testimony to the welcoming nature of his Fordham peers. “I love the sense of a close knit welcoming community that comes with being a part of SOL and the bash really showed that. Everyone who wanted to come was welcomed with open arms.“

For Josephine Fernandez, FCLC ‘17 and president of SOL, the main purpose of this student club is creating a sense of community across the student body. “What’s great about our club,” she said, “ is that you don’t have to be latino to join. If you’re looking for a group to chill with, to relate to or just spend time with, we’re the club for you.”

A devoted fan of the club, Pierre-Louis has been anticipating these events since she first attended them last year. “It’s so much fun”, she quipped, “students are so excited and constantly bursting with energy, whether it’s because they love the food or the random bachata dance parties.”

“We’re trying to educate the campus as much as we can on latino culture and get people immersed in it,” Bernard-Santana added. ““This is a club directed towards the greater Lincoln Center community.”

Members of the SOL e-board have been actively talking to the Office of Multicultural Affairs about future outings. During their weekly meetings, members talk about commonalities between all students with Latin American backgrounds, as well as issues they are concerned with. “The entire latino community got upset when they heard Donald Trump’s remarks since we share that story of immigrating to this country, it hurt all of us.” Bernard-Santana echoed this sentiment, stating “We’re trying to educate the campus as much as we can on latino culture and get people immersed in it. This is a club directed towards the greater Lincoln Center community.”

“ We do talk about rice and beans and other latino stuff,” Fernandez added,  “but in reality as long as you can find one thing to relate to – bam! ”