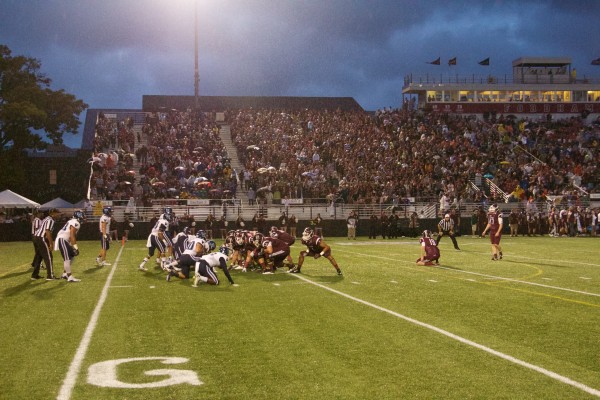 Fordham lines up for an extra point after scoring against Villanova earlier this season. (Luke Momo/The Observer)

It’s week five of Fordham University’s football season. It’s Fordham’s first Patriot League matchup of the season. It’s also Fordham’s opportunity to add another win to its current record of 3-1. Standing in the Rams’ way, however, are the Leopards of Lafayette College, who have been struggling thus far in the season with a record of 1-3.

As the Rams travel to Easton, Pennsylvania, they hope to extend their winning streak to three games, coming off a blowout victory over Monmouth University. Fordham defended its turf with a final score of 54-31, led by junior quarterback Kevin Anderson who passed for a season-high 340 yards, and rushed for another 35 yards.  He stands now as the first quarterback in Fordham history to have thrown five touchdown passes in back-to-back games.

The Leopards played spoiler in their last outing when they faced off against Wagner College’s Seahawks. While it was the Fall Festival and homecoming for Wagner, the Leopards stole the show when they rallied from a two-touchdown deficit to a capture a 35-24 victory. Their junior quarterback, Drew Reed, completed 23 of 34 passes for 308 yards, while rushing for another 10 yards. Lafayette’s defense forced three Wagner turnovers down the stretch, ultimately registering their first win of the season.

One key factor to consider ahead of this week’s matchup is that Saturday will be the 34th meeting between the two teams and the Leopards lead the all-time series. However, Fordham took last year’s game with a 42-18 victory on Jack Coffey Field, which was coincidentally also played on October 3rd. Fordham has won two of the past three meetings, making this game even a greater must to watch.

Last year was running back Chase Edmonds’ first appearance in this series and he performed in flying colors, rushing for 187 yards and two touchdowns. This leads to the second key factor to keep in mind: the offense. This is a Fordham offense that is atop the Patriot League when it comes to scoring, averaging 35.5 points per game. Edmonds leads the league with his 164.2 all purpose yards per game, and along with junior receiver Robbie Cantelli, the two rank top ten in the league in receiving yards per game.

The third factor to keep in mind heading into this Saturday is that Fordham has quarterback Kevin Anderson and junior placekicker Makay Redd. Both were named Corvias Players of the Week, which gives Coach Joe Moorhead’s squad the edge this weekend. Anderson was named the Corvias Patriot League Offensive Player of the Week subsequent to his spectacular show this past weekend against Monmouth. He ranks first and second in the Patriot League in passing efficiency and passing yards per game, respectively.  Redd was named the Special Teams Player of the Week, coming  off his performance against Monmouth as well. He keyed in a pair of field goals, 29-yarder and 54-yarder, which was just one yard shy of the all-time Fordham record. He has connected on 15 of 17 PATs this season and a reliable go-to-guy for Coach Moorhead.

The game will be streamed live on the Patriot League Network and on WFUV 90.7 FM. This Saturday’s matchup should be an exciting one and you won’t want to miss it.