Pope Francis’ Visit was Worth the Trouble 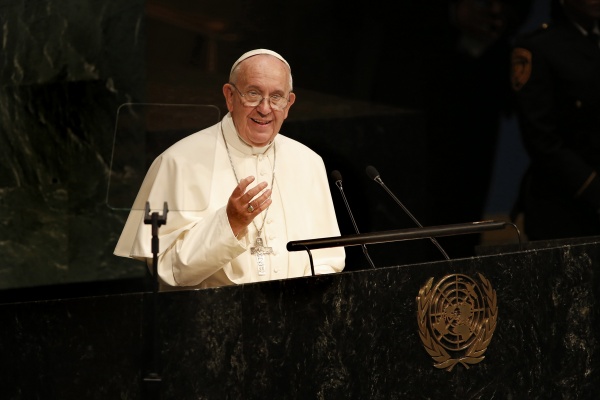 Never in my life did I think that I would see a day where President Obama, Beyoncé and the pope were in New York City (NYC) at the same time, and yet now I have. Of these three high-profile individuals, it is somehow Pope Francis who garnered the most attention. His progressive teachings and lack of ostentation are unprecedented within the Church, bringing about a refreshing change to a historically conservative institution and traditionally grandiose lineage. Swarms are clamoring for a piece of the pope, and with so many people trying to see him, it’s no wonder there has been quite a commotion in terms of service changes, road closures and God knows what else.

Of course, that is not to say that all of the hubbub hasn’t been met with some protest—especially considering the fact that the United States is supposed to be largely secular. Some groups, like the Freedom From Religion Foundation (FFRF), based in Madison, Wisconsin, seem to be taking the city’s enthusiasm for the visit personally. FFRF’s estimated 1,200 NYC members are protesting what they believe to be a show of favoritism towards the city’s Catholic community. But the truth is that the pope represents more than just his religion; he represents tolerance and progress, which is something that should be universal.

What is often forgotten is that the pope, as the head of Vatican City, an independent nation, is technically a political leader. Vatican City is its own nation, and the pope serves as head of Vatican City. Now I’m not saying that Beyonce shuts down Manhattan every time she shows up—although she probably could if she wanted to—but every time President Barack Obama rolls into town, many of the same security measures are put in place for him. Streets are shut down in at least a two block radius around the president, and there are MTA delays galore. Why should the pope be treated any differently? Additionally, whenever the Dalai Lama or any other noteworthy dignitary is in town, similar changes are made to ensure his or her safety during their visit.

Pope Francis has spoken out about the inclusion of divorcés and the LGBTQ community and has addressed subjects like climate change and gender issues, all in his short two years as the infallible voice of the Roman Catholic Church. This pope seems to be renewing interest in the church from groups that were previously shunned, thus making him somewhat of a religious rock star—it’s no wonder people flocked to the city for a chance to get even a glimpse of His Holiness.  A recent Public Religion Research Institute survey on American Catholics found that 80 percent of their survey respondents (11,115 people) who identified as “current Catholics” see the pope and U.S. bishops as understanding of the needs and views of American Catholics. Nearly 60 percent of those who identified as “former Catholics” agreed.

Given his popularity, it makes sense that the city pulled out all of the stops for this pope’s first U.S. visit. Even for a particularly humble pope, all of the formalities and regalia are befitting of this momentous occasion. Here at Fordham, the University Church and parts of the Lincoln Center campus were adorned in yellow and white, the Vatican flag proudly displayed in preparation for this historic visit. Campus Ministry was in full celebratory swing, handing out rubber bracelets and “Flat Francises”—otherwise known as “pop-up popes”—to anyone that will stop. Our resident Pope Francis cutout is more popular than ever–it’s about as close as most of us will ever get to him. Even those who don’t necessarily identify as Catholic are drawn into the excitement, and why wouldn’t they be? His message is to spread peace and love to all. It doesn’t matter if the various religious denominations that make up the Fordham community identify with Pope Francis on a faith level; Pope Francis is respected and celebrated because his message is one of inclusivity, something that especially resonates with us.

While people could have been complaining about how the pope’s visit made their commute that much harder, or how all the news was about the pope, instead many seem to have embraced his arrival. When I asked a friend who isn’t Catholic why he was so happily putting up with all of the commotion, his answer was pretty simple: “Because this pope is the best pope.”