The B-Word and its Many Meanings 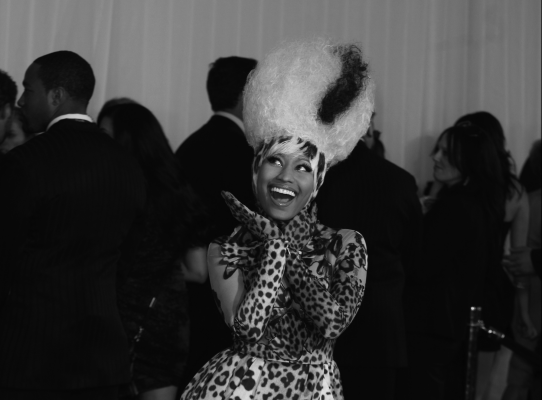 "When I am assertive, I’m a bitch. When a man is assertive, he’s a boss," famous female rapper Nicki Minaj said. (Kirk McKoy/Los Angeles Times/MCT)

Unfortunately, Minaj is not the only woman who deals with sexism in the workplace. Her experience mirrors the cruel labels and expectations placed on countless female entrepreneurs. From a young age, girls are expected to look perfect: to have long luscious hair and a thin body with full breasts and derriere. Despite the lack of opportunities, women also need to be educated, successful and  perfect housewives. Sadly, females who do not accurately fit this insurmountable description are then labelled as “bitches.” This vicious cycle of slapping the label “bitch” on women is hopelessly sexist, and opposes the ideals of feminism that are desperately needed in our contemporary society.

The current definition of “bitch” contradicts the ideals of gender equality and destroys the possibility of creating a society where women have social, political and economic rights. Women often self-identify as “bitches” to imply they are strong, independent and assertive. Nevertheless, the original definition of a “bitch” is a female dog. Although this isn’t the central context of the word practiced in modern society, the current  meaning increases the derogatory interpretation of the word. The basic meaning of the word “bitch” creates a parallel between women and dogs, which are animals that represent obedience and service. There are diverse ways to use the word “bitch.” To be “someone’s bitch” is to act like someone’s servant, to sit in the “bitch seat” is to be in an inferior position and to “bitch” is to complain annoyingly. The Oxford Dictionary also defines “bitch” as “a person who is completely subservient to another.”

I would not like to be referred to as a “bitch.” However, I am more comfortable being called one by a woman than by a man, because the word often has a largely different interpretation when used by a woman. When used by a man, the word is meant as a personal attack, since his definition of “bitch” uses my femininity as a weapon.

As a result, I feel less attacked when a woman calls me a “bitch” because we share that piece of identity. I have experienced and witnessed that unapologetic, non-submissive women in powerful positions are often targeted, particularly by men. Big Sean, along with a myriad of other male artists, commonly use the b-word to label women. In his song “I Don’t Fuck With You,” Big Sean refers to his ex-fiancé Naya Rivera as “a stupid-ass bitch,” “crazy bitch” and “dumb-ass bitch.” In fact, he uses the word “bitch” 21 times in the song, often directing it at the award-winning actress and singer. Men often call these strong women difficult, bossy and aggressive, along with other stereotypical characteristics of a “bitch.” However, by using misogynistic terms like “bitch” to insult women, men are actually exposing their own insecurities and fear of women in power. When a woman calls herself a “bitch” or directs it at another woman, it is often done with a positive intention.

Admittedly, women are not the only ones who are vulnerable to being referred to as “bitches.” “Bitch” can be used as an attack on both men and women; unlike women in powerful positions, men are targeted when they are considered to be of inferior status. In the simplest terms, the word “bitch” represents stereotypical characteristics assigned to the opposite gender. Features such as assertiveness, toughness and decisiveness are often synonymous with “bitch” when referring to a woman. On the other hand, “bitch” is synonymous with weakness, docility and obedience when the word is targeted at a man.

“Bitch” simply represents a man who does not have a dominant personality and can replace the words “softie” and “baby,” while a “Son of a Bitch” is defined as “a person (especially a man) who you strongly dislike or hate” by Merriam-Webster. The Dictionary Of Contemporary Slang uses “a spiteful or vindictive male homosexual” as one of the definitions of the word “bitch,” which is horrifically homophobic and misogynistic. The b-word continues to modernize by expanding through various connotations; we can use this to our advantage by adjusting the misogynistic definition, and creating a society where women are treated as equals.

It’s certainly possible, since “bitch” isn’t the only word that has been repurposed by the individuals it was designed to hurt. Gloria Naylor. an african-american novelist,  once explained in an essay that her family used, and reclaimed, a certain slur word that represented “worthlessness or degradation and rendered it impotent.”  Attempting to strictly abolish a term from everyone’s vocabulary is not only nearly impossible, but also foolish. In contemporary society, words are capricious. Instead of fighting the word “bitch,” which can easily be replaced, we can create our own definition or use the existing slang proudly. We can take control of the fate of a word and steal power away from those that want to hurt us with it. We can avoid perpetuating the degrading male stereotype of a “bitch” by solely using the word with positive connotations, and embrace “bitch” as a term referring to a woman in a position so powerful that others find it threatening.