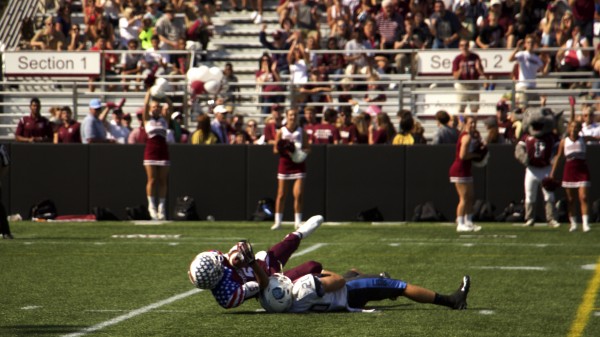 The Rams offense gained most of their yards through the air on Saturday. (LUKE MOMO/THE OBSERVER)

It’s not every day you see Fordham football legends, alumni, and students all come together on a Saturday in mid-September. But, when it does happen, you know you’re in for a treat and Fordham University’s 2015 homecoming game was just that. The 8,000 plus spectators who gathered for the 14th installment of the Liberty Cup at Jack Coffey Field witnessed quite a football game.

The 1:05 p.m. kickoff showcased a matchup of New York football between the Columbia Lions and Fordham Rams. This day wasn’t just about football, but paid a tribute to the first-responders eleven years ago, including the New York and Port Authority Police Departments, and the Fire Department of New York. Indeed, the Rams trekked onto the field with their classy “stars and stripes” uniforms with one goal in mind: to protect their turf. They would do just that.

Fordham struck early in the first quarter when junior Quarterback Kevin Anderson threw a 28 yard pass to Phazahn Odom, completing a seven play, 65-yard drive at the 3:05 mark. Although the Lions tied the game in the second quarter, the Rams answered back with a 75-yard, ten play drive when Anderson connected with Austin Longi with 9:29 left in half. On their next drive, the Lions pulled to within four points with Cameron Nizialek’s 31-yard field goal, leaving the score at 14-10. With eight seconds remaining in the half, Anderson capped a 5 play, 54-yard drive with a touchdown pass to Robbie Cantelli, giving Fordham a lead of 21-10.

Fordham continued the grind in the 3rd quarter, when running back Chase Edmonds ran for 74 yards in 2 plays to further the lead to 28-10. Coach Al Bagnoli and his Lions wouldn’t give up too easily and dominated the remainder of the quarter with two separate touchdowns, cutting their deficit to four points, with a score of 28-24. Columbia had traveled uptown wishing to play spoiler, but Fordham’s Coach Joe Moorhead hoped to secure another Liberty Cup victory .

The Rams proved why they have been the winningest New York City football team since 2012 as they rambled through the Lion defense. At the 13:14 mark in the 4th quarter, Anderson connected with Edmonds for a touchdown, completing an 8 play, 79-yard drive. Six minutes later, Anderson once again located Odom for another touchdown, extending the lead to 41-24. Columbia’s stagnant offense suffered, and Fordham sealed the deal with a 34-yard field goal from Makay Redd, winning with a final score of 44-24.

Junior defensive back Jihaad Pretlow led the Fordham defense with 13 total tackles, and linebacker Stephen Hodge added eleven stops of his own. Anderson went 22-for-30, passing for 330 yards and five touchdowns, also rushing for another 70 yards. The offense was supported by a cast consisting of Edmonds, Odom, Longi, and Cantelli who combined for a total of 241 receiving yards.

Fordham is now 2-1 for the season, moving to 18-2 over the past three seasons when playing at the Jack. They hit the gridiron once against next Saturday, September 26 at 1 p.m. when they host Monmouth University.