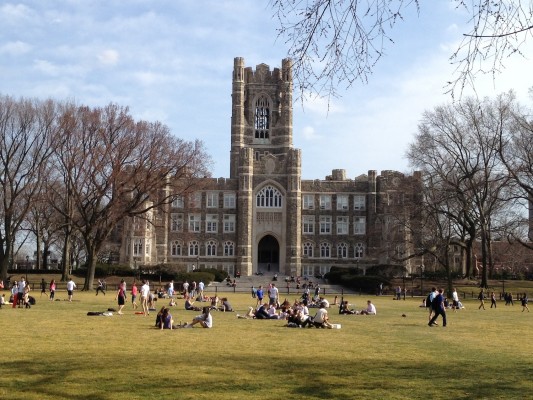 By ANA FOTA and BEN MOORE

On Sept. 20 at 7:19 p.m, members of the Fordham community received a security alert, informing them of a “suspected bias crime” at the Rose Hill campus. According to the email, a backwards swastika was scratched into a stairwell wall, in the Lalande Residence Hall, which houses freshmen.

A student notified university officials at approximately 2:20 p.m. on Sept. 20th of the markings. Father McShane, president of Fordham University, residential life staff and public safety officers on campus were all notified of the incident at that time. The NYPD was also contacted and have classified the incident as a “suspected bias crime.”

It was discovered, while questioning residents of Lalande Hall, that a student had seen the vandalism on Sept. 15, but did not report it at time, since “it appeared to be merely scratches.”

The incident comes a few days before the Jewish celebration of Yom Kippur, a holy day of atonement, and was described by the Office of Public safety as “anti-semitic” in their email.

This marks the second bias incident this month at the Rose Hill campus, after the event on Sept. 13, in which a black student found a racial slur carved into his dorm door. Students reacted to the legal language used in that security alert, which referred to to the incident as a “bias crime.”

The residential life staff of Martyr’s Hall, which Lalande Hall is a part of, has scheduled a meeting at 9 p.m. tonight, Sept. 20, to address the incident.

Below is the email that was sent out to the Fordham community from Public Safety, which has called upon anyone who has information on the incident to report it immediately.

Per an email sent at 9:25 p.m, Public Safety has stated that “the NYPD Hate Crimes Task Force deemed the vandalism in Lalande Hall to be a non-bias criminal mischief case, pending any new information.”

“At approximately 2:20 p.m. on Sunday, September 20, 2015, a student notified University officials that he saw what appears to be a crude, backwards swastika approximately two inches across scratched into a stairwell wall in Lalande Hall.

Residential life staff and officers from Public Safety responded to the residence hall, and notified NYPD, which has also responded to the scene, and has classified the vandalism as a suspected bias crime. As with all bias and suspected bias crimes, Father McShane was notified immediately. In questioning residents of the hall, Public Safety and Residential Life staff discovered that a student had seen the vandalism on Tuesday, but hadn’t reported it because it appeared to be merely scratches.

Though it is not yet known exactly when this vandalism took place (and may never be), it is impossible to ignore the fact that its discovery comes just a week after a racial slur was found carved into a student’s door in the same residence hall, and comes in the midst of the Jewish high holy days, compounding the hurt offered to the University community. Such racist and anti-Semitic actions, freighted with a history of violence, are repellent to any civilized person, and certainly the opposite of what Fordham University expects of the members of its community. As with any such act, if the person who committed it is identified, he or she will face University disciplinary proceedings in addition to whatever criminal charges are filed.

Anyone having any knowledge of the incident is urged to contact NYPD Hate Crimes Task Force at (646) 610-8763, or the Office of Public Safety at (718) 817-2222, and ask to speak to the Duty Supervisor.
Students are also encouraged to contact their resident assistants, commuter assistants, Office of Multicultural Affairs staff, resident ministers, and student life staff if they have anything to report, or if they simply want to discuss the incident and its effect on them and the community. Members of the University community can find additional resources at Fordham’s Bias/Hate Crimes FAQ: fordham.edu/bias.”