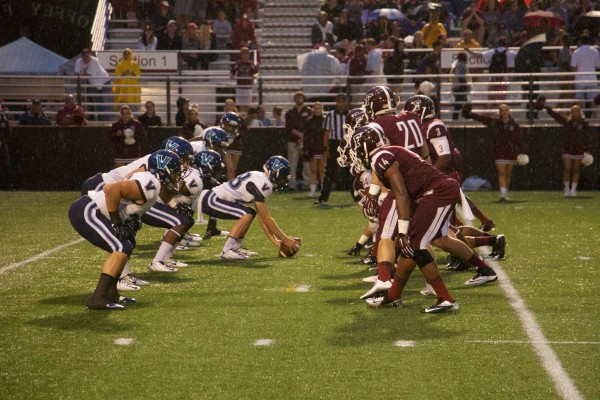 A forecast of showers didn’t deter Fordham fans from packing the Jack Saturday night in what was the Rams’ football home opener against the Villanova Wildcats. The 6:05 p.m. kickoff marked the 30th all time matchup between the two teams, and the Rams hoped to keep things rolling after last week’s victory over Army.

The #2 seeded Wildcats are the highest ranked opponent to play the #16 Rams at Jack Coffey field and this mismatch made things more difficult for Fordham to bounce back from a 14-0 deficit early in the 2nd quarter. Villanova struck early five minutes into the first quarter when QB John Robertson, the reigning NCAA FCS Player of the Year, capped an 11 play, 69 yards set with Kevin Gulyas’ reception in the end zone. The grind continued in the 2nd quarter with Robertson’s 7 play, 56 yard drive to extend the lead to 14-0.

Fordham’s junior QB Kevin Anderson answered back at the 3:52 mark with a 20-yard completion to receiver Corey Caddle to cut the lead in half, 14-7. The Wildcats missed on two field goal attempts in the 3rd quarter, still leaving some faint hope in the Fordham faithful.

The reigning Patriot League Champions ran out of gas in the 4th quarter as they failed to capitalize on three different trips to Villanova’s territory. The Fordham defense seemed to be the only thing going for them as Jihaad Pretlow and Caleb Ham led the team with a combined 19 tackles, along with Nick Thorpe’s three sacks. The offense however was limited to 182 yards, leaving Fordham now with a 1-1 record.

The Rams hope to bounce back on September 19th when they host rival Columbia University at this year’s Homecoming matchup.