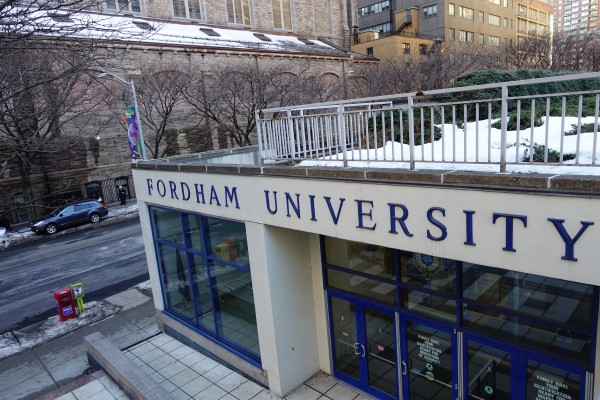 The incoming freshman class holds the record for largest registered class at Fordham Lincoln Center (LC), with over 600 students.

With the opening of the new residential building on campus, McKeon Hall, came the possibility of a larger residential community at LC. Incoming freshmen classes are set to gradually increase over the span of several years, leading to both the freshman dorm and the upperclassmen residential building, McMahon Hall, being occupied at their full capacity. According to Keith Eldredge, dean of Students at LC, “ it’s all part of the plan of growing Fordham, by increasing the class size over three or four years in a row, before we get to the desired number of students on campus.” This number, according to Eldridge, would be fulfilled in the event that all beds were occupied in both dorms.
The 2015-2016 academic year is a “transitional” one, as Dean Eldredge put it.
The class of 2018, first to experience the newly opened freshman dormitory, was considerably larger than the previous class, with 556 students, as opposed to 449 in the class of 2017. Last year all the beds in the building were occupied, with the exception of a few last minute withdrawals. There were, however, at least three floors worth of vacancies in McMahon. “We knew that was going to happen,“ Eldredge said, “when we added McKeon we added a little over 430 beds and there was no way to add that many residential students all at once.” During the 2015-2016 academic year, there will be freshmen living in the upperclassmen hall, on the fifth floor and half of the sixth. Jenifer Campbell, director of the Office of Residential Life at LC said that every freshman that got placed in McMahon expressed an interest in the building. “We were able to accommodate the acceleration of the growing of the freshman class because we had some vacancies available [in McMahon],” she said.

This year no additional classes will need to be added, according to Eldredge. Most classes will, however, will be completely full. A factor that accounts for the lack of space on campus is the need most clubs have to hold their meetings during the only official activity block, on Thursdays from 11:30am to 2:15pm. “It’s also a matter of scheduling,” Eldredge said. Both he and Campbell agree that the increase in the number of students will not drastically change life on campus. “It will be tighter,” Campbell said, “but I still feel that with collaboration and cooperation between the different departments, we will be able to accommodate everyone.”

The 2015-2016 academic year is a “transitional” one, as Dean Eldredge put it. Although there will be more students on campus, the space issue will only be improved by the Fall 2016 reopening of the renovated law school building, at 140 West 62nd Street. The building’s ground floor will serve as a space designed primarily to host club meetings and other student activities, as “the spaces where we hold club events is not always ideal,” according to Eldredge. “That is where the building is going to help.”

The increased number of students coming to Fordham also affected the way New Student Orientation (NSO) is organized. The class of 2018 was the first one that needed to be divided, between Pope Auditorium and the conference hall on the 12th floor of the Leon Lowenstein building. “That’s the new normal,” Eldredge commented.

Students will experience no other changes in terms of space at LC. “What I think is the key point to consider,” Campbell mentioned, “is the fact that the increase is just accelerated: we are at a fuller capacity a year sooner than we thought, but the number of individuals on campus was anticipated.”

Last year Fordham acquired the old College Board building, at 45 Columbus Avenue. Eighteen administrative and faculty offices have moved into the building, which opened in July 2015.

According to Patricia Peek, director of undergraduate admissions at Fordham, the Lincoln Center campus is set to welcome undergraduate students from 37 states, with nine percent of the freshman class consisting of international students. According to Peek, the commuter population will remain constant.

Campbell welcomes the class of 2019, stating: “we are excited about the new class coming in, as we always are to have new students join our community.It’s always an exciting time for our staff and for the community members.”