Toto, We’re Not In Romania Anymore 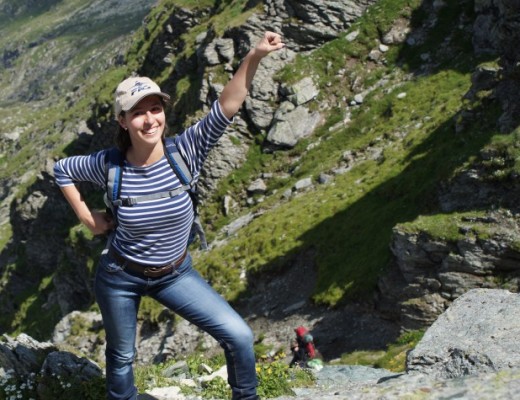 Ana, on a path through the Carpathian Mountains, in the heart of Romania. (PHOTO COURTESY OF ANA FOTA)

I remember dragging two enormous suitcases and a backpack to campus on move-in day this time last year. I had just left home behind and moved to the mighty New York City. As an international student coming to the United States from Bucharest, Romania, there was a lot I had to get used to. I left a town known for its early 20th century architecture, manifested through majestic Parisian-like buildings, for a life amongst imposing concrete mountains and impending deadlines. When I first got here, I was alone and uninformed. I didn’t know anyone who lived in the city, nor how an American university worked. But eventually, confidence, good company and unique experiences are what got me through my first year of college.

Leaving everything familiar an ocean away and diving into a world unknown was very brave of me. Aware of that, I began my college career confident and hopeful, but with a healthy dose of insecurity aboard. Knowing that I had a lot to learn allowed me to quickly grasp new information and develop my understanding of this mysterious world I was slowly uncovering. However, being convinced that I could succeed if I tried motivated me daily to work hard towards creating a life for myself in the New World. Overall, I’d say a combination of confidence and doubt was the perfect recipe for success.

First off, I needed to make friends. The human being is a pack animal, not designed to live in solitude. After spending some time amongst American students, I learned their ways and was quickly adopted as their foreigner puppy-friend in need of guidance. I was taught what expressions to use and what I should never say. Apparently, I should not trust everything I hear in movies – who knew “oh no, I’m in a pickle” is not a phrase cool people use? The main difference between Americans and Europeans, if you ask me, is their openness towards fellow human beings. Having American friends allowed me to better understand the society I was now living in, and why ‘Dancing With The Stars’ is a show I should, in fact, watch. There are so many cultural differences I have yet to understand, like why Americans find fart jokes funny.

I shared not being used to American customs with fellow international students. Meeting people with various backgrounds made the whole experience that much more diverse and enjoyable. Knowing other international students allowed me to express my misunderstanding of how peanut butter and jelly could possibly be “delicious” together, as well as discuss the cultural shock we were all experiencing. Being able to talk about being so far away from home made the whole experience seem universal. What we were, in fact, going through was not moving to a weird continent, it was the first time on our own.

Mommy can’t save you now

What I did not yet realize would affect me was a crucial difference from living at home: the lack of family. Whilst living in the parental house, I was naturally accustomed to a life of getting home to a mother ready to make me feel better about my day. Starting a new life without my mother, my brother and my father meant putting them in the viewer’s seat. We were no longer going through life together. From then on it was me, alone, telling them stories about my day as if we were all talking about a friend we knew. Thank god my mum doesn’t cook, otherwise I would miss her even more. Being away from family made me appreciate having a roommate that would ask me about my day. Having someone to listen to me ramble on about how I spilled coke all over myself at lunch that day truly made a difference, as far as keeping your morale up goes.

Considering I had never been to school in taught in English before, I had never written an essay nor experienced office hours, I did not know how I should behave. Like a child, I learned how to behave by watching others around me.

After 12 years of a routine in a specific educational system, I had to forget every habit that pertained to my school life and start learning how to do it the ‘American way’, where you are trusted enough to be allowed to eat in class, as long as you are paying attention. Trusting students to look out for their own best interest was not something I had experienced before. I mean you are not punished for eating in class, suddenly leaving to go to the bathroom, or arriving 20 minutes late to class. The way you behave in class is strictly your responsibility, and is treated as such. High school in Romania seems very strict in comparison, as such behavior was not allowed and not obeying the teacher’s way would often be deemed “rude” or “impertinent.”

I had to shed and re-learn everything I knew about going to school. For example, it is considered polite in Romanian schools to stand up from your seat when a teacher enters the classroom, as a sign of respect. I found myself doing that here, particularly at the beginning of the year, and then pretending I had dropped something on the floor only to conceal my embarrassment. I had a history teacher in high school that was particularly strict when it came to this custom. My first semester of school here I took history and, I found myself standing up every time our professor would walk in, as if I had just woken up from a bad dream. Subconsciously, I am set to behave the way that I have been taught is proper, in the span of so many years.

Looking back and gazing forward

I bet my life on the unknown and it paid off.

Now, already about to start my second year of college, I look back at what got me here. I remember that I decided to move to the U.S. without thinking much about it. When an American family friend had explained to me that getting into a good college in the U.S. was possible, I set my mind on it and never looked back. At the time, I had never even visited the country, but it did not matter, because I had this gut feeling that I would be happy there. Trusting my gut was what made all the difference, as being confident in my decision and working daily towards my goal did, in fact, get the job done.

When I came here, although I knew that I had so much to learn, although I had no promise that I was making the right decisions, I was confident enough to believe that everything was going to turn out just perfect. In fact, I’m still sure it will.