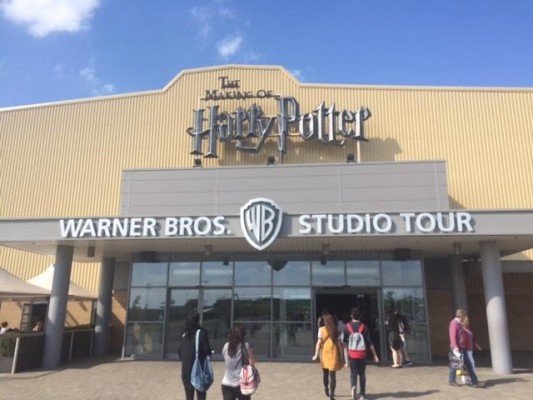 When I was seven years old, my parents took me to see “Harry Potter and the Sorcerer’s Stone.” After I saw it, something just clicked and I fell in love. After that my parents got me every one of the books to read and took me to each opening night and midnight release. Seven books, eight movies and fourteen years later, I just had the best day of my life.

Since the bus ride I took felt like the ‘Knight Bus,’ I suggest booking a ticket with Golden Tours for the trip. Even though the website might call it “The Warner Brother’s Studio Tour London,” it is well outside of the city. A package with Golden Tours provides you with a ticket for the tour as well as transportation there and back for about the same price as a rail ticket. They give you three hours to take the tour and shop, which is more than enough of time.

“So, when is Fred and George’s birthday?” asked the tour guide in the first room we went to, which had film posters for the franchise around the world. I raised my hand to answer and she looks at me to say “Oh not you, with the ‘Dark Mark’ on your shirt. I don’t want you to win points.” I was not the only one dressed up for the occasion, as a few fans around me were fully decked out in Hogwarts robes. The guide looks around and saw no one else attempting to answer the question. “Fine, you,” she said, “But I don’t want to give any points to Slytherin.”

After I answered correctly with “April 1st,” we were treated to a film narrated by the film’s’ producer, David Heyman, which explained the origin and popularity of the books. The group was then ushered into the next room where we viewed a film starring the principal cast, Daniel Radcliffe, Emma Watson and Rupert Grint. The short film explained how they spent most of their lives on these sets and further thanked the thousands of crew members that helped them bring the magic to life. At the end of the film, the screen lifts up to reveal the entrance to the Great Hall. It was like a shining beacon guiding me towards the entrance of Harry Potter heaven.

Once through, we arrived at one of the many fully immersive parts of the tour, the Great Hall set, which contains everything the movies have shown, minus the enchanted ceiling of course. Filled with props and costumes of both students and professors, the Great Hall made me feel like I was a first year entering Hogwarts for the first time, waiting to be sorted.

From then on, the tour was self-guided through Studios J and K (“Who gets it?” asked the tour guide before we were led into the theatre).

Studio J was filled with all the visual effects, including props, costumes and portions of sets from iconic moments from the film. You could take a ‘selfie’ in the  ‘Mirror of Erised,’ watch potions being made in Snape’s classroom, step into Dumbledore’s office or even come face to face with the entrance to the ‘Chamber of Secrets.’

They even showed the secrets behind making a broom fly in an interactive exhibit where you have the chance to put on some robes, sit on a broomstick and fly through London (aka a green screen). The line seemed a bit daunting, but I of course had to try it out. The seat was surprisingly uncomfortable, but I still bought the picture to bring home to my parents as a gift.

Studio J brings you face to face with the Hogwarts Express. Here you could make your way through the train’s carriages, each of which represented one of the films. You could also “ride” in a carriage outside of the train, so your family can film you interacting with the video outside your “window.”

Right before leaving Studio J, we had the opportunity to treat ourselves to a glass of ‘butterbeer.’ The mixture is very sweet, and you might not finish it all before moving to Studio K, where they prohibit food and drinks. Even if you can’t finish it, you can always save the cup as a souvenir.

Between studio J and K are a bunch of outdoor sets. You can take a ride on the Knight Bus, knock on the door of Number 4 Privet Drive and even walk across one of Hogwart’s crooked bridges. You can also see the Potter family’s old home and take a ride in both Hagrid’s motorcycle and the Weasley’s Ford Anglia.

Studio K focuses more on behind the scenes construction and housed concept art, models and the technology behind special effects and creature design. They also focus on large scale set production, as you are able to walk through Diagon Alley, complete with moving pieces in the windows and exteriors of the shops.

The highlight of Studio K is definitely the last room which holds a 3-D model of Hogwarts and the surrounding grounds. The room is designed like a spiral, so you can see the model all at heights and angles. The lights even change with the music, shifting the time from day to night.

The tour ends as you make your way through Ollivander’s Wand Shop, with wand boxes lining the walls in every nook and cranny. Each box has a name for a cast or crew member that has worked on films, as a final thank you for all their hard work. They even have one for Harry Potter himself, Daniel Radcliffe.

For any Harry Potter fan, big or small, the Warner Brother’s Studio Tour is definitely worth it if you are already in, or near, London. The tour brings you into the world of both the books and films and shares secrets that you would not find anywhere else. My seven year old self definitely felt like this was a dream come true.

Bonus tip: If you’re looking to buy a character’s wand while you’re still in London, the gift shop is is definitely the place to buy them as they were about 10 pounds less than the Platform 9 ¾ store. I treated myself to the beautiful wand used by Narcissa Malfoy in the films, my only big personal splurge while in London at £24.95.

Read about my adventures to other Harry Potter related locations.