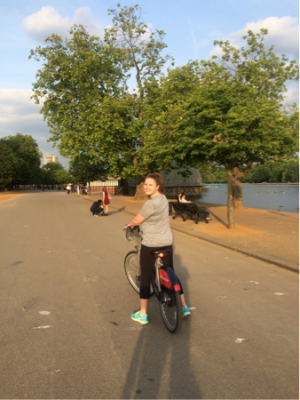 As an avid bike rider at home on Long Island, I felt I could handle the streets of London, Amsterdam and Dublin without a problem. Sadly, I was mistaken. But with the many interesting adventures I had throughout the Tour de Europe, I would now like to think of myself as a biking expert.

What better way to get to know the streets of London than by exploring the city on a bike? With a reasonable price of ₤2 every half hour, you can rent a Santander bike for as long as you’d like. There are 10,000 bikes at over 700 docking stations distributed throughout London, that people typically use for leisure, a light workout or to commute to and from work.  Thankfully, there is a bike dock located a block down from my apartment, Landward Courts, where I got first-hand experience. Without a helmet, or any other protection, I headed down the touristy and hectic Oxford Street and then made my way to Hyde Park. Swerving in and out of the spaces between cars and the occasional bus, I daringly immersed myself (literally and figuratively) into the streets of London. Please note that cars and or buses are not be afraid to run you over.

At Hyde Park, I went for a more leisurely bike ride, where I noticed people playing rugby, roller blading and sunbathing after a long day. There are also two little restaurants by the water if you ever feel parched or hungry. After my grueling and eye-opening experience, I could not feel my legs as I walked around the park and decided that I should stick to riding in Hyde Park, instead of diving into the death trap streets of London again.

After my experience biking around the hectic streets of London, you would have thought that I learned my lesson. However, after arriving in Amsterdam, it was clear to me that cycling was the thing to do. Everywhere I turned there were bikers riding along the busy streets like a herd of wild animals.

I decided to test the waters and rent a tandem bike with my friend, Erin, to explore the streets. After walking approximately five miles through the bustling area of Amsterdam and stopping at a few random bike shops, we finally stumbled upon Mac’s Bike Shop. For €15 we rented a double bike and spent the next hour taking on the streets of Amsterdam with our ‘selfie stick’ in hand.

Locals laughed at us and other active bikers had no problems notifying us with their bells whenever we were doing something wrong. However, we did get to ride along the breath-taking canals and along the busiest and most bizarre streets in Amsterdam. But if you have never been to Amsterdam, let me warn you: never ride a bike on the wrong side of the road, it’s like trying to fight a rip tide at the beach.

After horsing around on our twin bike and nearly running people over while trying to keep our balance, we realized that we had about twenty minutes before the bike shop closed. While we were furiously peddling back, we saw our lives flash before our eyes on the last turn of the day. But, after squeezing past a moving bus and a speeding taxi, we rounded the corner and arrived back at the shop with four minutes to spare. Riding our bike in Amsterdam was sort of a death wish, but it was without a doubt something we will never forget.

After a long weekend in Ireland, I finally completed my last stop on my Tour de Europe. Although I was adventurous in Ireland, biking there was not nearly as terrifying as it was in Amsterdam or London. For just €7 a day, you can rent a “Coca Cola” bike that is basically the equivalent of the Santander bikes in London. Thankfully, there were many bike lanes, which made it safe and easy to ride despite the amount of people in the streets of the Temple bar area. Riding across the beautiful O’Connell Bridge, I finally made my way through Temple Bar and across Dublin to Trinity College, which I highly recommend, in order to see all that it has to offer (mainly the Irish college boys). After about an hour and a half, I decided to make my way back along the riverside where some Irish men crowd the streets while indulging in a beer after work. To end my voyage, I stopped at Lemon Jelly Café on Millennium Walkway to get a delicious crepe, then headed back to the bike rack to officially end the Tour de Europe.