Splish Splash, We Went to Bath 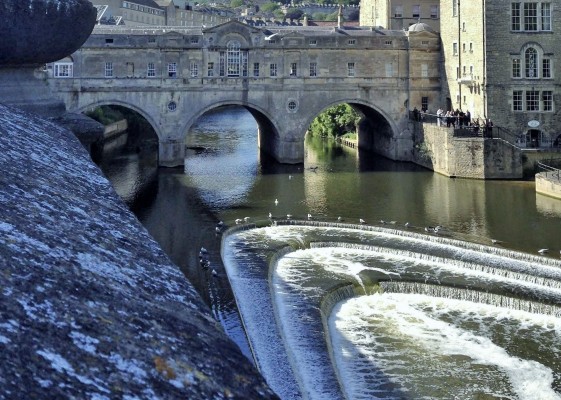 By MARY MEED and SYDNEY THORNELL

Bath (pronounced B-AW-TH here, in England) is known to many literary fanatics as Jane Austen’s humble abode. Present day Bath is London’s getaway destination for weekend partying, gambling and swimming. Johnny Depp and Matt Damon found Bath’s gorgeous views so enticing that they even bought homes here. Additionally, this town is a world heritage sight that attracts thousands of visitors each day.

Below are a couple of must-sees and dos during your visit:

Going to Bath and not seeing the Roman Baths is like going to New York City and not seeing the Statue of Liberty.  For a small price—twelve pounds, you can wander through the historic bath sites that reek of Roman history. They were built by the Romans who used the spring as a shower in a three-bath layout—the east, the west, and then the largest in the center with a grand opening to let in the rays of sun.  Apparently, a banished Celtic king contracted leprosy and was cured of his pus-filled sores swimming in the then majestic hot water springs. Many signs say, “Do not touch the water,” but Mary did and can confirm it is hot and majestic, but its healing powers are questionable due to the now green and mucky waters.  Our recommendation would be to spend about an hour at the baths wandering through its museum and taking pictures with the characters dressed in togas (equivalent to taking a picture with Tigger at Disney World).

Even if you’re not religious, you should definitely stroll through the aisles of Bath Abbey. Its detailed arching ceilings and vibrant colored stained glass windows will definitely leave you appreciative of the early sixteenth century English Gothic architecture. We both lit candles, which made us feel that we left a little piece of ourselves in the church. On the outside, be sure to notice the angels climbing up the ladders that frame the church. If you look closely, you will see two angels climbing down the ladder which we were told symbolizes sins that will carry you further away from God. This served as a warning to the illiterate population of Bath.

After your tours you may be a bit thirsty.  If you’re looking for a quaint afternoon tea, stop by The Bath Bun Tea Shoppe.  We recommend the Cream Tea with buttery scones and fruity jams to suit your fancy although the venue itself is casual and gives off a local vibe. This venue is cash only, but it should only cost you under £10. Don’t forget pinkies up!

A pasty is a Cornish meal that consists of meat and vegetables held together by thick and flaky filo dough. If you’re peckish after your afternoon tea, head over to Pasty Presto. It’s only across the street and offers take out (or as the Brits say “take away”) and sit down snacks.  Originally, Cornish miners ate the pasties and held it by the crust so that their dirty and poisonous hands wouldn’t touch the good stuff.  Afterwards, the crust was thrown out and the miners would head back to work.  The small restaurant offers many flavors but the “Traditional Pasty” is the real thing and will never leave you disappointed and should only cost about four pounds.

No matter how full, you may be you must stop at Marshfield Farm’s Ice Cream Parlour for the best cone of your life. For just three pounds, you can choose from about thirty flavors that are all GM (genetically modified) free, Palm Oil Free, mostly gluten free and made without artificial coloring or flavoring. The farm itself is located only two hours North of Bath and we have never tasted ice cream so fresh. Definitely try the salted caramel and chocolate fudge brownie in a cone, which can also be topped with soft serve ice cream.  If none of our other recommendations seem appealing, just this ice cream will make Bath well worth the trip.