A Writer’s Inspiration for ‘The Buck’ 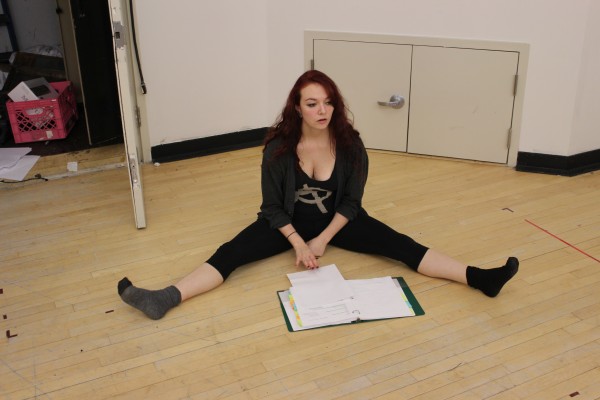 Student performers preparing for rehearsal in the Whitebox for "The Buck" on April 9, 2015.(Photograph by Jess Luszczyk / The Observer)

What do you get when you combine a talking deer, dream sequences and a small town in Wisconsin? The answer: Fordham at Lincoln Center’s final studio show of the spring semester, “The Buck.” Running from April 23-25 in the White Box Studio Theater, this student-led production centers around finding personal identity in the midst of social pressures. “It’s a lot about trying to find your place in the world,” the play’s writer, Garrett David Kim, Fordham College at Lincoln Center (FCLC) ’16, said.

Kim, a theatre major with a playwriting and directing concentration, began penning the script last August, partially drawing inspiration from the writing styles of playwrights such as Sam Shepard and Anton Chekhov. He was also certain that he wanted to incorporate a talking animal and base it in a small town. “I kind of just let the play take me where I wanted to,” Kim said.

An homage to Kim’s hometown, “The Buck” is set in Northern Wisconsin and revolves around a character named Jake, a lost and vulnerable 20-something-year-old. When his sister brings a deer into the house, Jake begins undergoing strange dream sequences. “The deer transforms in his mind into this spirit that embodies people’s desire to be their true selves and find the nature that’s inside them,” Kim said. In addition, other major subplots include Jake’s infatuation with his sister’s boyfriend, as well as the wolves that surround their rural neighborhood.

“[A central theme of the play] is the idea of nature versus pressures of the communities that we are in and the pressures of conforming into communities, which I think everyone can relate to on some level,” Kim said. Jake’s most tangible struggle throughout the play, for example, is his infatuation with his sister’s boyfriend, an infatuation he knows is not acceptable within his cultural context.

According to Kim, the production is also a “love song” to small communities, showing that the people inhabiting them are not as narrow-minded as they are often thought to be. “We can easily look down on small towns as being [filled with] very simple people with simple lives, worries and concerns,” Kim said.

However, Kim argues that the struggles confronted throughout “The Buck” are fundamentally universal, regardless of whether you live in New York City or Wisconsin. “Feeling like outsiders or wanting to fit in–those are things that I think everyone relates to,” he said.

Although the White Box is a small venue, Kim and his cast are working diligently to make the theatre seem larger than it is. “There’s scenes in the house, outside in the woods, there’s animals, there’s wolves and deer. We have people on puppets, we have people on lights and sets and costumes. There’s a lot of moving parts to this,” Kim said.

While his previous Fordham Lincoln Center production “Pilot’s Wings,” which was shown in October 2014, took on a significantly more serious tone, Kim said he wanted this production of “The Buck” to include some humor. “[I wanted to] write a play where I’m cracking and intentionally writing jokes.” Described by Kim as a tragicomedy, “The Buck” doesn’t conform to a specific genre, but does have several comedic elements.

Ultimately, Kim said he hopes audience members walk away from the White Box with a better knowledge of themselves and the communities they’ve built. In addition to the serious undertones throughout the production, however, he’s also aiming for a few laughs. “I think comedy is the best way to get people to think about stuff like that,” Kim said.