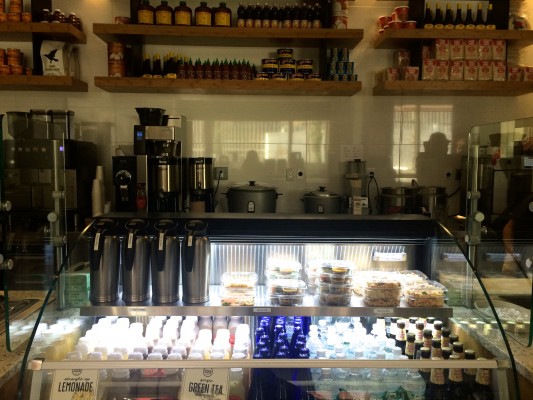 BONMi features a chalk wall where customers can make their mark. (PHOTO BY MARIA KOVOROS/THE OBSERVER)

The dining options available to faculty and students continue to expand at Fordham at Lincoln Center, with the introduction of BONMi, the campus’ first retail dining location.

BONMi, which began its soft opening following the Easter break, officially opened on Tuesday, April 14.
BONMi, which offers a build-your-own take on popular Vietnamese dishes such as the Bánh Mi sandwich, as explained by restaurant founder Buddy Gillepsie, a Bánh Mi is a Vietnamese take on a French baguette sandwich with various spices, meats and vegetables.

Menu pricing, according to Gillepsie, varies based on fillings chosen for an entrée, but depends largely on the meat chosen, ranging from $9.00 for chicken to $10.50 for beef.

On the genesis of BONMi, Gillepsie shared that “the company that I worked for, they were looking for something new and different. My boss and I … once a week [stopped] off at a little Vietnamese Bánh Mi shop. We loved the flavor combinations of Southeast Asian cuisine, so … that’s where the spark came from.”

Gillepsie explained that BONMi was conceived as a means to make Vietnamese food more accessible in major American cities. “We saw this as a way to bring an up and coming cuisine into the limelight. Kind of like, I don’t want to say Chipotle, but how the burrito was [made accessible] to everyone.”

“[Sodexo] came to us during a transitional period … it seemed to be an effort to offer the students a healthier cuisine,” Gillepsie said. Students responded positively at George Washington University, the first Sodexo BONMi partnering school, leading to BONMi opening in other universities. Commenting on the success of BONMi, Gillepsie noted, “I believe the younger generation is more adventurous in eating.”

Other locations can be found across universities in San Francisco, Salt Lake City, and New Jersey.

BONMi came to Fordham after Sodexo approached Gillepsie about the once vacant retail space in the law school. “[Sodexo] asked me if I wanted to check it out. We looked at it … and we gave them the plans, made some modifications. They did a wonderful job and it looks fantastic, I love it.”

Student response, thus far, has been mostly positive from Gillepsie’s perspective. “[Tables] fill up nightly at dinner and the majority [of feedback] is about how delicious it is and they love the flavor profile. I think it’s a lot different than your traditional sandwich.”

“I really like it. I think the vibe … of the place is really cool. I thought the food was really good,” Anna Strauss, FCLC ’18, said. Sophie Scott, FCLC ’18, shared a similar sentiment, “I think it’s really great. I’m really excited to see that Fordham … is beginning to offer the Lincoln Center students more food options.”
BONMi has also been expanding student palettes. “I went never having tried Vietnamese food before, you could have asked what Vietnamese food was and I wouldn’t have been able to tell you,” Scott said.

Still, BONMi isn’t without it’s criticisms. Ben Conlin, FCLC ’17 felt that “it doesn’t give you enough bang for your buck. It’s expensive and therefore not a viable option.” Others, like Strauss, agree. “It’s a little pricey for what you get, but I enjoy it.”

Located on the first floor of the law school building, BONMi is accessible only from a storefront entrance on 62nd Street, just past the undergraduate dining hall.

Though improvements are being made, many students, such as Scott, still want more. She said, “I hope that [Sodexo] continue[s] to do similar partnerships in the future and bring us more food options … where we could use our declining balance dollars.” Strauss envies the dining options available at Rose Hill. “I love Cosi, and you know, Starbucks coffee is better than [Sodexo] coffee.”

The number of options available at Lincoln Center is now comparable to those offered at Fordham College at Rose Hill (FCRH). Although, FCRH does feature more brands outside of Sodexo.