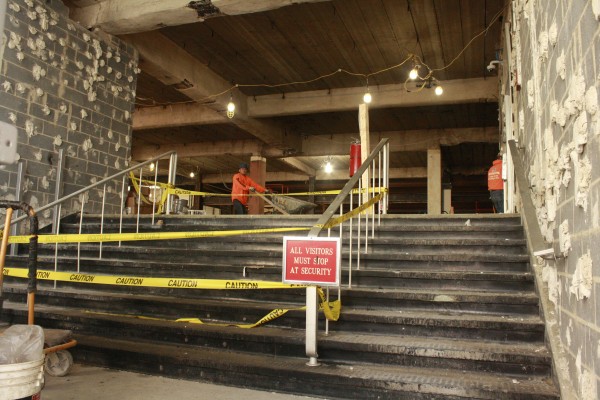 Construction of the Old Law Building will be completed by Fall 2016. (PHOTO BY EMILY TIBERIO/THE OBSERVER)

While the new law school building and McKeon residence hall are almost a full academic year old, construction is underway on the old law building, commonly referred to by faculty as 140, due to its address of 140 West 62nd St. The repurposed 140 building is set to open in Fall 2016 and will mostly serve as a student center, with places of interest for undergraduates.

Due to its location in Manhattan, the Lincoln Center Campus has a prevalent space issue. A master plan has been developed with the purpose of resolving this problem over the span of 30 years, designed by the Space Planning committee. The plan was set in motion in 2015, with the McKeon building being the first establishment to be added to the campus. Vice President Brian Byrne, who is in charge of the committee, said, “We want to build a campus here, not a collection of schools.” The space on campus is shared between the two undergraduate colleges, Fordham College at Lincoln Center (FCLC) and Gabelli School of Business at Lincoln Center (GSBLC) and the four graduate schools: the Graduate School of Education (GSE), Graduate School of Social Work (GSS), Graduate School of Business (GSB), and the Fordham Law School.

The repurposed building will serve as a hub for the new undergraduate Gabelli School of Business, as the 11 classrooms can fit up to 65 people each. 35 students is the average Gabelli class size. The new Quinn library will be moved there and will span over three floors, providing space for students to study. It will be open to all students.

The garden level of the building will be a student affairs space, with designated centers for some of the biggest clubs on campus, including the United Student Government (USG), Campus Activities Board (CAB), and The Fordham Observer. Several student affairs offices will also move there, including the Career Planning and Placement Center, Health Center and Counseling Center. Keith Eldredge, dean of students at Lincoln Center, whose office will move into the building, believes having all offices pertaining to student life concentrated into one building will facilitate involvement. “In a sense, it’s going to be a one-stop shop for all the student needs outside of the classroom,” he said.

Eldredge explains the process of redesigning the campus as a “domino effect, with the new law school building being the first domino to fall.” Everything from the 140 building was moved into McKeon, while the old building will primarily be used as an undergraduate student affairs and class space. Because several offices that are currently found in the Leon Lowenstein building will move there, the vacant spaces will be used for FCLC classes. Another goal of redesigning the campus is to bring in all offices located in various spaces across the city, that have been used by the University.

Fordham is still looking for a sponsor for the building. In the mean time,“you can call it old law, people know it better as that,” Byrne said. Recently the university has also acquired was used to be the College Board building, on Columbus Avenue. No further information about the building is known at this point.

CORRECTION: A previous version of this article stated that the average Gabelli class size was 65 students. It is in fact, 35.