What Graduates Are Planning (Or Lack Thereof) 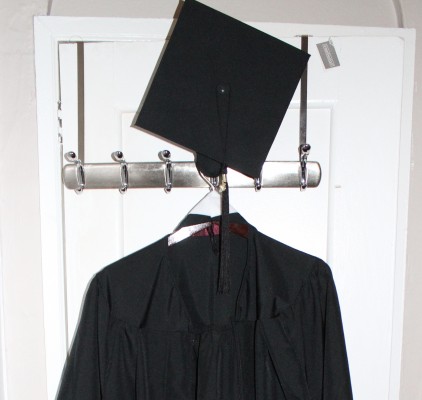 A cap and gown awaits graduates this May! (PHOTO ILLUSTRATION BY BRIKEND BEHRAMI/ THE OBSERVER)
By KAYLA OGLE

For many upcoming graduates, it’s the dreaded question at most family gatherings or parties: what are your plans after you get your degree? After spending four years working towards graduation, they now are faced with what they’re going to do once they leave. The flood of options becomes clear: graduate school, taking a year off to figure things out, travel, join a volunteer program or if you’re lucky enough, get a job in your respective field.

According to Bloomberg Business, in 2014, the unemployment rate for college graduates between the ages of 22 to 27 was 5.6 percent, leaving many upcoming graduates nervous about what the future holds for them.

“I might have a panic attack, cause what am I doing with my life?!” Oona Murley, an upcoming Fordham College Lincoln Center (FCLC) ‘15, exclaimed, when asked about life beyond college. “But my plans after graduation are to return home for a brief visit and then to travel around Europe with some friends from high school.” Murley is originally from Fort Ross, Calif. and after her travels, she plans to move back to New York City full time. “I plan on getting a job with the likes of the New York Public Library. I’m also considering writing a book. Pipe dreams, you know?” she said with a chuckle.

[quote_center]“I’m equal parts confident and terrified about life after Fordham.”[/quote_center]

When asked how she feels about life after college, Murley got a thoughtful look on her face before answering, “I’m equal parts confident and terrified about life after Fordham. I’ve never been a big fan of the unknown, but regardless, the prospects are all very exciting.”

Another member of the graduating class, Morgan Henson, FCLC ’15, from Lakewood, Wash., is another senior that, though nervous, is excited about the opportunities that graduating has to offer. “I’m sure something will come up, but right now it’s just a little nerve-wracking to have a plan A, B, C and D.” And Henson certainly has a number of plans, including grad school (though not in the immediate future) and joining the Navy. His main plan, as of now, is to apply to the School of Russian and Asian Studies in Moscow.

“My first plan is to hopefully go to Russia through a program I applied to. I want to be a diplomat in Russia, so learning about the culture, language and people will be good for me,” Henson explained. The program would require him to take Russian-specific history and politics classes, as well as an intensive language course; he would be there for at least a year.

Henson is also thankful for the education he has received at Fordham. “Fordham isn’t necessarily known for history, but I think that many of the professors in our program prepared me for a life in the professional sector and I’m grateful for that,” he said. Leaving the comfort of this university behind will be difficult, but the fact that so many seniors have been pleased with their time here shows that Fordham has prepared them all, no matter the outcome.

Shannon Edly, FCLC ’15, a political science major, is most likely going to head home to New Jersey until things get sorted out. She said, “My goal is to be working on a 2016 campaign, I’m just not sure whose campaign that will be yet!”she said. And Maria Coluccio, FCLC ’15, who double majored in Natural Science and English, says that as of right now, she’s got “nothing big” planned. “I plan on taking some time off before applying to medical school, and in the fall, I’ll be continuing Fordham’s MA program in Ethics & Society,” Coluccio said. Both of these seniors are hopeful about their options and continuing their education past Fordham. “The education I have received here [at Fordham] has been truly amazing and I’m so grateful for it,” Edly said. “Fordham has a reputation of excellence and I know that it speaks volumes about me as a person to be a graduate of this university.”

Graduates are now facing job opportunities, traveling, living in other countries, continuing their education or trying to figure out their degrees. Regardless, with the four years of education that Fordham has provided, that leap into the “real world” is one that graduates will handle with stride.