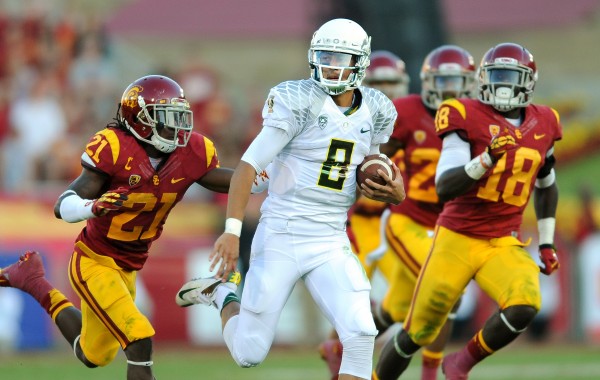 Marcus Mariota may be one of the best players in the draft, but will he be available for the Jets to select? (PHOTO COURTESY OF WALLY SKALIJ/ LOS ANGELES TIMES VIA TNS)

The New York Jets played an embarrassing 17 weeks of football last season. After finishing 4-12, changes were made including both the Head Coach and General Manager being fired and the signing of high-profile free agent Darrelle Revis. However, The Jets hold the sixth overall pick in the 2015 NFL Draft and have a lot of holes to fill.

Their issues on the field expanded across almost every position last year. Offensively, Geno Smith had a disastrous season, which led to him eventually being benched for Michael Vick. His options at receiver were limited, with only one receiver even eclipsing 500 yards. The Jets weren’t much better defensively as they ranked ninth in points allowed in the league. Despite having a very talented defensive line, the linebackers need improvement heading into the 2015 season.

New York should first look toward upgrading their quarterback to Oregon’s Marcus Mariota. If he is unable to be selected, they should bolster either their receiving corps or their linebackers. The best options at these positions are Kevin White and Vic Beasley, respectively.

Geno Smith is not the answer at quarterback, but neither is Ryan Fitzpatrick. Heading into the 2015 draft, the Jets do not have a definitive starter at the most important position in football. With Jameis Winston expected to be selected first overall, University of Oregon Quarterback Marcus Mariota should be New York’s top target no matter the cost.

The team will likely need to trade up for the rights to take the former Ducks star, however; Jets GM Mike Maccagnan seemed open to the idea of swapping picks. During a conference call with season ticket holders, he confessed trading up is a possibility. “Sitting at six is a very good spot to be in,” Maccagnan said. “It does allow us the potential to move up in the draft because we’re not far from the first pick.”

Adding the Oregon signal caller would make New York a contender in an improved AFC East. The Jets have already built a strong team by adding superstars Darrelle Revis and Brandon Marshall. Their offense would become even more explosive with the mobile quarterback throwing to Marshall and Eric Decker.

Combining a potent attack with their ever-improving defense led by Revis and Quinton Coples, New York could transition from the 4-12 team they were in 2014 into a legitimate playoff contender. To overtake the defending Super Bowl champion New England Patriots in the AFC East, the Jets need an improvement at the quarterback position, and they should use the sixth pick on Marcus Mariota to fill that role.

If the Jets are unable to draft Mariota, New York will look to boost their offense at the wide receiver position. West Virginia University’s (WVU) Kevin White is arguably the top receiver in this year’s class with the highest ceiling of any of the incoming wideouts. Despite having Brandon Marshall and Eric Decker as go-to options for whomever they have starting under center, neither are long-term solutions. White is a franchise player with the potential to become one of the top receivers in the league as he develops in a pro-style offense.

Drafting the former Mountaineer would allow Decker to move to his natural slot position and instantly transform the Jets into a pass-first offense. The three effective threats on the outside would also open up the running game. Chris Ivory, who split time with Chris Johnson last year, will be the full time starter in the backfield and will benefit greatly from the much-improved receiving corps.

Kevin White would start opposite Brandon Marshall in offensive coordinator Chan Gailey’s spread attack. At WVU, White thrived in the spread offense and had 109 receptions for 1,447 yards and 10 touchdowns in just his senior year. He is an effective route runner with big play potential and is the perfect complement to Marshall and Decker in the Jets’ spread offense.

The Jets have completely overhauled their defense this offseason. New Head Coach Todd Bowles will implement a blitz-heavy defense that is sure to capitalize on the speed and power of Sheldon Richardson and Muhammad Wilkerson up front. The addition of cornerbacks Darrelle Revis and Antonio Cromartie should secure the back end of a defense that gave up the third most passing touchdowns in 2014. Drafting Clemson’s Vic Beasley will add dominant element to their remaining weakness, an ineffective linebacking corps.

The Tigers’ all-time sack leader was the ACC Defensive Player of the Year last season and one of the best edge rusher in college football. While the Jets were able to put pressure on quarterbacks, adding a dynamic outside rusher would allow Bowles to do even more with his defense. Beasley is a future franchise all-star who can immediately start at outside linebacker for the Jets.