Graffiti Artist JR Brings INSIDE OUT to Fordham 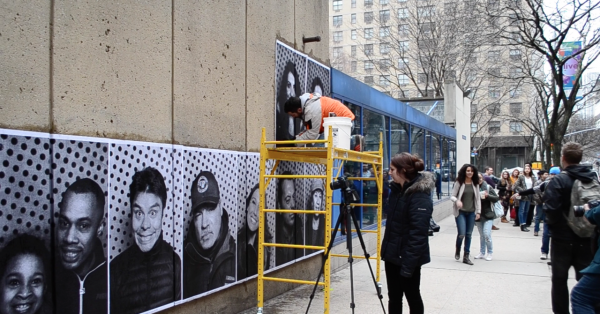 Artist JR pastes the photographs for his Inside Out Project on the wall of Fordham College at Lincoln Center. Students and non-students line up to get their photo taken and watch JR at work on March 25, 2014. (Sri Stewart/The Observer)

It’s not everyday that students can snap photo booth pictures of themselves during their class break. On March 25, graffiti artist and photographer, JR, invited everyone, including students at Fordham College at Lincoln Center (FCLC), to partake in his interactive global project entitled “INSIDE OUT.”

Parked in his polka-dotted-mobile photo booth, JR brought the INSIDE OUT project to nearly 200,000 people from more than 112 countries. With Fordham as one of his destinations, JR hoped to give everyone the opportunity to share their portraits both physically and digitally; posters of the portraits were pasted on the side of the Lowenstein, as well as online on the INSIDE OUT artist page. According to the artist’s page, this means of photography “is a global platform to share their untold stories and transform messages of personal identity into works of public art.”

The Urban Studies department, along with Associate Professor of Theatre & Visual Arts, Mark Street, invited JR to bring his project to Fordham. “Public art is the theme of the [Urban Studies] department this semester. There’s been a conference on public art in the law school, and we also had some filmmakers come in; JR’s project is part of this series,” Rosemary Wakeman, director of urban studies, said. “We have a distinguished visitor come and spend time at Fordham every semester – this semester, Street contacted JR, and we had him come here. This is the origins of the project.”

The beginnings of the project began last February, when Street, the urban studies department and JR started testing the project at Fordham. “We actually did a test in February, and it was so cold – the posters weren’t sticking onto the wall. We’ve been waiting for the warm enough weather, so that we could do the project,” Wakeman said.

According to Street, Fordham serves as a great location to host JR’s street project. “I think [Fordham’s Lowenstein building] is the perfect wall to paste the portraits of the public,” he said. “Also, this is the perfect place for foot traffic; I like the populism a lot, and I like the idea of photography being out on the street.”

Students enjoyed participating in the interactive nature of JR’s photography. “I think it attracts people because it is so public, and it is an interesting way to go about photography,” Emily Stone, FCLC ’16, said. “With these portraits on the wall, people get the opportunity to see art, especially those who wouldn’t necessarily go to an art gallery.”

Furthermore, students are impressed by the ambitiousness of JR’s project. “Personally, I think it is very ambitious to find a parking lot, and to grab as many people that you can into the project. Also, the process of taking pictures and posting them onto the wall – that’s just something requires a little bit of imagination,” Quinrui Hua, FCLC ’15, said. “People in this project will have fun with this.”

While waiting in line, students were excited to snap a silly picture of themselves. Brenda Wallis, FCLC ’17, said, “I honestly think [JR’s project] is so cool – it’s so new and we haven’t done anything like this before. It is something that we can come out as a community and have fun.”

Portraits from JR’s visit to Fordham can be seen on the outside wall of Lowenstein for two to three months. “[INSIDE OUT] lets people express themselves and what they are feeling about the world,” Wakeman said. “This is a big thing, because [JR’s INSIDE OUT] brings together public art, students, faculty and the neighborhood.”