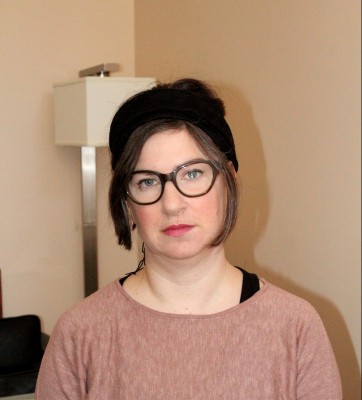 In Margaret Schwartz’s, assistant professor of communication and media studies at Fordham College at Lincoln Center (FCLC) new book, “Dead Matter: The Meaning of Iconic Corpses,” which comes out Nov. 25, 2015, Schwartz suggests that corpses are more alive than one would think.

With a cover of a green stick-figure wearing a white glove (alluding to Michael Jackson), the book highlights two things: the first being a reference to a discipline of academia known as “new materialism,” which focuses on the cultural and political significance of objects. Second, she emphasizes the role of corpses that were once public figures, ranging from politicians to entertainers.

However, this changed, and with the introduction of embalming, photography faded away. “Embalming allowed for the preservation of the appearance of the body much as the photograph does, and in the period that it is displayed, [the embalmed body] will look very much like the deceased,” she said.

According to Schwartz, embalming also transformed a corpse in a negative way.  “[The corpse] not only is an object, a thing or a body, but it also became an important memorial object in a way or representation,” she said.

A major example Schwartz provides is that of the body of Vladimir Lenin, Russian revolutionary and political theorist, which was initially put on display. “There are people there who have to maintain the reverence looking at the body because it’s almost like going to the circus or something: it doesn’t mean the same thing it did.”

Contrastingly, Schwartz argues that there are bodies that can become a powerful message. “There are iconic figures that have become powerful public images through their deaths,” Schwartz said. According to Schwartz, an example of this loss of dignity is noticeable in the corpse of Emmett Till, a young African-American boy who was brutally murdered in 1954. He became an iconic corpse when his mother chose to publish photos of his disfigured body. In this sense, Till became an image for oppression and social inequality.

Lastly, the book highlights “tabloid bodies,” or corpses of public figures who were very much alive in our media outlets. According to Schwartz, “The people who we have the most images of in life and as living people, the images of that change. Now every picture you see of Michael Jackson is a way in which you know the seeds of his death are somehow in there.”

Schwartz refers to as a “body politic, where the corpse is representing a political or nation state.”

A major point throughout “Dead Matter” is the idea that, essentially, corpses can enable people to avoid the process of mourning. “You don’t want to confront that death, you want to continue to consume the images. So on the one hand it takes away dignity and on the other hand it allows, at a psychological level, to believe that person is not dead and allow them to continue to produce cultural meaning,” Schwartz said.

With a release date of this fall, what does Schwartz hope readers will take away from the book? “Death matters; death is important and that mourning is a process that deserves our attention and our dignity,” she said.