“A Chorus Line”: The Splinter Group Brings Musical Back to FCLC 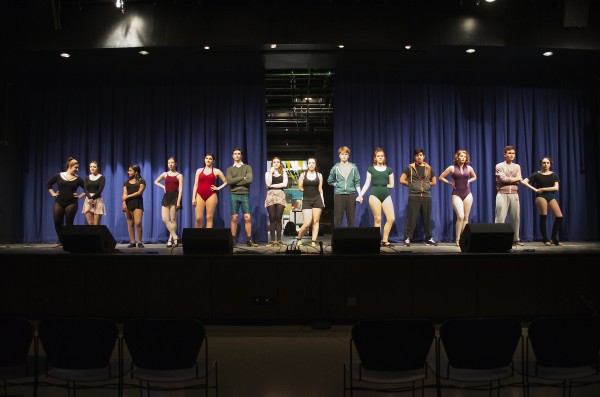 In Pope Auditorium, the Splinter Group opened the curtains to Fordham College at Lincoln Center’s (FCLC) first musical in two years: “A Chorus Line.” The musical was performed on March 2.  Although those involved were under a tight time constraint, the cast and crew successfully pulled through to have the show go on.

“A Chorus Line” revolves around a group of dancers auditioning to be in the chorus of a Broadway show.  As the musical progresses, each character sings about their past experience in order for the director to get to know them. The show has been one of the most prosperous on Broadway, garnering numerous Tony wins, in addition to its own film adaptation.

One of the directors of “A Chorus Line,” Christina Mastrangelo, FCLC ’16, said, “Fordham does not have a musical theater program yet, so we wanted to bring that to our audience.  It is a very important, and often, underlooked side of theater.  Often, it [musical theater] is seen as cheesy, for lack of a better word.”

Christina Mastrangelo and Alexandra Vittorini, FCLC ’15, the co-directors of “A Chorus Line,” are also the President and Vice-President of the Splinter Group.  Both Mastrangelo and Vittorini, with the help of the cast and crew worked to put together this ensemble-based show in less than a month.  Due to inclement weather, all involved endured the process of putting a cast and rehearsals together with little to no time to spare.

Vittorini said, “Our biggest feat was that we did the entire show in a month from start to finish.  Our audition dates were Feb. 3, and the show [was] on March 2.  The fact that the cast has pulled together and done a whole show in less than a month is the coolest thing.”

Despite the hard process of pulling the musical together, Mastrangelo, Vittorini and the rest of crew put up the show, and their hard work paid off. Amanda Jean, FCLC ’18, who played Connie in the musical, added, “I wanted the audience to get what makes the entertainment business so important and to realize how hard it is because it may seem very easy from an audience [member’s] perspective,  but it really is a lot harder than it looks. I think it’s important for the audience to understand why people go through [the entertainment industry] and it shows a lot about why it was specifically important to each person who was auditioning.”

“I’ve never put on a show with such little time and rehearsal. It was a challenge to squeeze what can normally be months of preparation into three weeks’ time, but incredibly rewarding,” Gianna Meaglia, FCLC ’17, said. Meaglia plays a sassy, indelicate dancer who couldn’t get dancing jobs, despite her talent, until she had plastic surgery. On doing the musical, Meaglia said, “‘A Chorus Line’ is one of those rare shows that successfully balances the entertainment of flashy dance numbers and a witty book with the depth of character reflection and development.”

Emma Copp, FCLC ’17, played Cassie, a dancer who had been featured on Broadway but stopped finding work when she moved to California. In the musical, her character moves back to New York for this audition, for which the director is her ex.

According to Copp, “The overall message of the show is about performing, that success can be fragile and fleeting, but love for the art can carry people through. It’s also just a fun show with a lot of humor and dancing.”

While the production accomplished what it aimed to convey, the greatest joy is felt by the cast and crew who worked tirelessly to have such an acclaimed musical successfully adapted at FCLC. Meaglia added,  “Nothing can ever compare to the sensation that overtakes you when you take your bow; it’s a high you chase for the rest of your life – that’s why we act.”