‘Under the Tent’ Cancelled-Tent Too Expensive 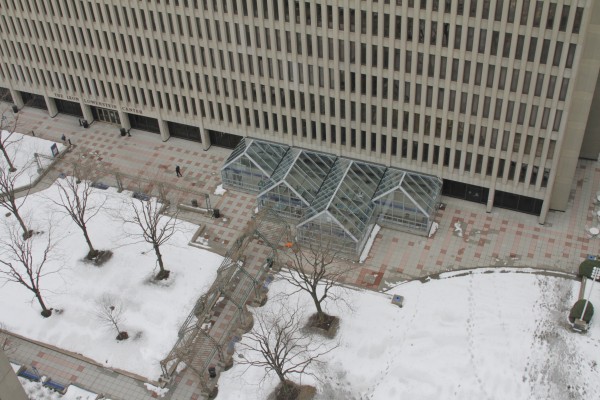 “Under the Tent,” an annual event co-sponsored by United Student Government (USG) and Campus Activities Board (CAB) at Fordham College at Lincoln Center (FCLC) has been cancelled. The event, which marked the last day of programming at the end of the spring semester and took place on the Robert Moses Plaza, was cancelled due to financial constraints imposed by the cost of the tent.

According to Dr. Dorothy Wenzel, director of Student Leadership and Community Development (OSLCD) and USG Advisor, “Under the Tent” had been financed in the past by being able to keep the tent up for longer than one day. “The only way we could afford this event was to have the tent up through Commencement and share in the cost with all the departments that share in Commencement tent rental,” Wenzel said. This year, however, other departments and schools that would share the cost of the tent pulled out.

According to Wenzel, Fordham Law School (LAW) is using the new Law building for all their events, and the Graduate School of Social Services (GSS) decided not to host a reception this year, leaving the Graduate School of Business and the OSLCD to share the cost. In addition, due to an incident where the tent collapsed the night before the FCLC Alumni Reunion in June 2013, the cost of the tent increased for safety purposes.

Wenzel approached Brian Byrne, vice president for Lincoln Center and inquired if the tent could still be kept up through Commencement. “We were told we would have to rent the tent at the full tent rental cost for that one night, which is just cost prohibitive,” Wenzel said.

The total cost of the tent was between $29,000 and $33,000, according to Wenzel. “Part of that cost also factors in that we have to order a permit for the tent, which is around 6000,” she said, since the Plaza is open to the public and needed to be up to city code.

Though “Under the Tent” is cancelled, USG and CAB are exploring other options for an end of the year event to mark the last day of programming, according to Wenzel. A committee of representatives from both USG and CAB has been formed in order to play this event, and are being advised by Christina Frankovic, assistant director for Programming in OSLCD and CAB Advisor.

“This new group is trying to dream up a new event for the end of the year,” Wenzel said. “They’re just in the planning stages right now. It’ll be distinct … My understanding is that they’re looking to make it a completely different event.”

The new event will take place in the Atrium and Student Lounge, but that does not always have to be the case for future events, according to Wenzel. “Christina Frankovic has made comments that when we move to 140 [62nd Street], there would be a nice lounge space with outdoor space for that but that wouldn’t be until 2017,” Wenzel said. “Whether this year’s end of the year event sticks or the group next year decides they want to do something different, its too soon to tell.”

According to Louise Lingat, USG president and FCLC ’15, once both USG and CAB were informed that “Under the Tent” was being cancelled, both clubs decided to plan another event in its place. “It was just a mutual understanding and agreement that we still want to have an event because we felt there could be no end of year. We figured there needed to be an end of the year event because it would be wrong to deprive the students of that,” she said. “And as a senior leaving I would hate to not have one because it would be the last time I get to hang out with my undergraduate friends here.”

According to Laura Paone, CAB president and chair of the end of the year event committee and FCLC ’16, the committee is preliminary stages of planning. “We are working to create a new identity for this event. We want something that will have the same integrity as ‘Under the Tent’ but something that works in our current situation that we can replicate for years to come,” she said.

Leighton Magoon, Student Activities Budget Committee (SABC) chairperson, USG treasurer and FCLC ’17, who is sitting on the committee in a budget advisory capacity, feels that the committee is really driven to establish a new event with student input. “The committee’s coming up with a lot of ideas but we’re looking for student feedback from Gabelli students, Lincoln Center students, from freshmen to seniors we’d like to see because we’d like to make an event that’s just as good if not better than ‘Under the Tent,’” Magoon said.

Though “Under the Tent” was cancelled, Wenzel was happy to see that students came together to plan a new event. “Thats the one nice thing we’ll continue doing,” Wenzel said, “having that big event to celebrate the school year in a way that hadn’t been celebrated prior.”