Depression On the Rise in College Students 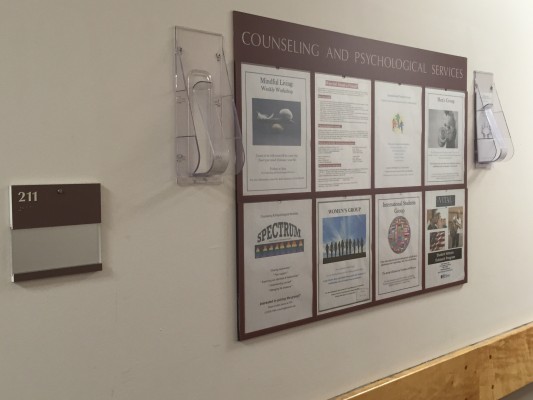 CPS reported that 87 percent of Fordham students felt overwhelmed by all they had to do. (Payton Vincelette/The Observer)

More Fordham students are seeking out help from the Office of Counseling and Psychological Services (CPS)-a pattern consistent with a nationwide study that shows an increase in depression among college students. From the 2011-2012 academic year to 2013-2014 academic year, the number of Fordham students who have sought out counseling and psychological services has increased by 2.6 percent, according to data provided by CPS.

Since the 2011-2012 academic year there has been an over 7 percent increase in the number of clinical appointments scheduled in CPS. A study released by the Higher Education Research Institute found that an overall 9.5 percent of incoming college students on a national level frequently reporting feeling depressed, a more than 6 percent increase over the last five years.

“I wasn’t at all surprised to see that finding,” Jeffrey Ng, director of CPS, said. “We’ve seen here at Fordham and certainly nationally other institutions of higher education there have been reported moderate increases in depression as well as in anxiety.”

Ng defined depression as a sizable shift in mood or behavior for a significant amount of time that compromises a person’s day-to-day functioning. He defined a significant time to be anywhere from two to three weeks. Though, he noted that the medical definiton for a substantial amount of time is actually six to eight weeks.

“Depression can look really different for different people,” he continued. “The most prominent mood is sadness, something that is persistent and seems to not remit when things go on around us that might be considered positive.”

As for shifts in behaviors, Ng listed a variety: from changes in sleep patterns, changes in appetite, decreased concentration, decreased motivation, changes in self-care to expressions of hopelessness, helplessness, death or suicide.

So, what’s causing this increase in depression? “I don’t think anyone of us could say with pinpoint accuracy what the one reason is,” Ng said.

Ng thinks one part of the increase is because of a rise in reporting cases of depression due to a slight destigmatization of mental illness and mental health care. “Despite the fact that there is still stigma and shame around reporting mental health difficulties and challenges … it has decreased during the past 10 to 15 years.”

Ng also attributed increased academic, financial and social pressures on students as factors that may be contributing to the rise in student depression. The study released also showed a 7.5 percent national increase of freshmen feeling overwhelmed by school work and other commitments. CPS reported that 87 percent of Fordham students felt overwhelmed by all their obligations in the past year.

“Pressure to do more to be ‘successful’ takes away time to do other things that might inoculate students from becoming depressed.” Different elements of self-care Ng listed were: “sleeping well, eating well, taking time to laugh and play and spending time with friends.” He continued, “Those are all really important things for our mental health and wellness.”

Ng attributed one last thing to the rise in depression: social media. Two downsides to social media Ng sees are a decrease in face to face communication, as well as exposure to “a sort of glorified, airbrushed version of people’s lives,” Ng said. FaceTime, Instagram, Facebook and other various forms of screen mediated interactions don’t give the Limbic system-what is essentially responsible for mood regulation as well as interpersonal contact characteristics like empathy and compassion-the same stimulation as real face time, according to Ng. “We all have imperfections and bad days, but you don’t generally see that in people’s profiles and posts,” Ng said. “It leads people to compare themselves to unrealistic standards which can lead people to have mental health problems.”

The Office of CPS offers several avenues where students can get help and learn more about mental health. All students are offered 10 free counseling sessions per academic year, but that number is not as cut and dry as it sounds. “We provide short-term treatment, which could range anywhere from literally a session or two, which is what some students would need, to a semester which is around 15 to 18 weeks. We really try to customize the length of the treatment to the needs of the student,” Ng said. To start their sessions, students can visit the office on the second floor of McMahon or call 212-636-6225 and schedule their preliminary interviews.

In addition to individual counseling, CPS also offers different psychotherapy groups that do no not count towards the estimated ten sessions promised to each student. Fordham College at Lincoln Center (FCLC) currently offers a gender and sexuality group, women’s group, men’s group, international student group and, lastly, mindfulness group. These groups are subject to change from year to year.

On the week of April 7, CPS will be hosting a mental health awareness week at Fordham College at Rose Hill (FCRH) which will include various events like faculty held TED talks, guest speakers and workshops. While these events are being held at FCRH, FCLC students are welcome to attend.

More immediately, students can take a free online simulation to learn more about recognizing the signs of depression, how to support fellow students and if necessary refer them to CPS. The simulation can be found at www.kognitocampus.com/login, creating an account with the enrollment key: fordham718.