Why the Tampa Bay Buccaneers Should Select Marcus Mariota Over Winston 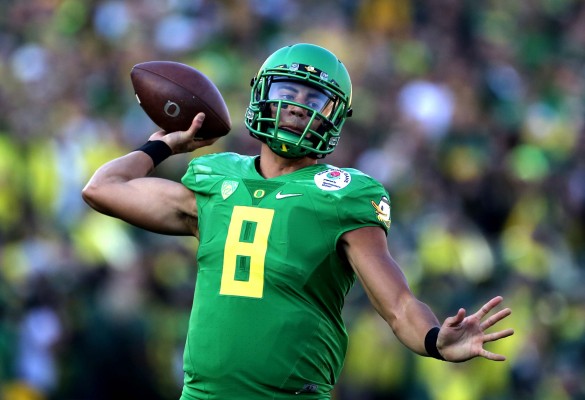 There may be questions regarding whether Marcus Mariota’s skill set will translate to the NFL, but he is still a top prospect. (Joe Burbank/Orlando Sentinel via TNS)

The top quarterback in this year’s NFL draft is almost too close to call between Florida State University product Jameis Winston and University of Oregon QB Marcus Mariota. Both are Heisman winners that come from winning programs, and both could realistically be the top pick in the draft. During the 2014 season for the Oregon Ducks, Mariota threw for over 4400 yards and 42 touchdowns, compared to only four interceptions. He completed almost 70 percent of his passes, and his passer rating has improved every season. Mariota is trending upward, while the Seminoles’ QB has been trending the opposite direction. Winston threw for just over 3900 yards, 25 TDs and a whopping 18 interceptions. For these and other reasons, Mariota is the safer pick.

While on-field performance is very important, off-field issues also have a strong bearing on a player’s future. Despite Johnny Manziel’s solid playing career, the shenanigans in his personal life have put his NFL career in jeopardy. Personal issues are a concern with Jameis Winston, and they might cost him the number one pick. Mariota has kept his personal life out of the headlines, while Winston has been the center of several controversies. There have been allegations of shoplifting, sexual assault and other examples of misconduct that make his character a question mark. A player’s talent is often overshadowed by his personal problems, and Winston’s reckless behavior off the field can transfer to his ability to perform on the field.

While Mariota might be the safer pick at number one, there is talk that there is mutual interest in his getting to the Eagles. There are reports that that Chip Kelly and the Eagles will “do whatever it takes” to pick Kelly’s former QB from Oregon. For this to occur, the Eagles would need to trade up in the draft from their current position at number 20. Mariota has also expressed interest in playing for the Eagles, but unless he has a very poor showing at the Draft Combine this year, he will probably be out of Philadelphia’s reach. In order to land Mariota, they would need to trade up to a top six pick, which is unlikely.Qua

While Jameis Winston and Marcus Mariota were both excellent college quarterbacks, Mariota is the safer pick. Mariota has improved in all of his collegiate seasons, while Winston’s performance dropped off in 2014. The Ducks’ quarterback has kept his personal life private, while Winston has had several off-field problems that could impact his performance. While they are both solid QBs at this point, Mariota seems to be a safer pick in the long run.