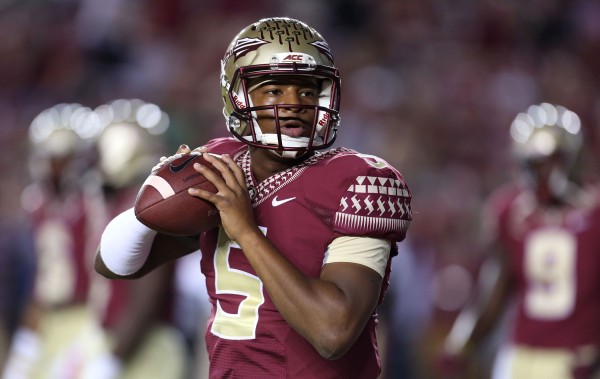 Jameis Winston may have behavioral red flags, but the former Seminole may be the most skilled prospect in the draft. (Stephen M Dowell/Orlando Sentinel)

The Tampa Bay Buccaneers “earned” the number one pick with their putrid 2-14 record in 2014 and clearly need a quarterback, leaving only two options: Jameis Winston or Marcus Mariota.

The two quarterbacks couldn’t be more different. Winston has a big arm and is mostly a pocket passer, whereas Mariota relies on his legs and supercharged Oregon offense to overwhelm opposing defenses. Both are effective, but Mariota had – by far – a better season last year. Nothing about 42 touchdowns and just four interceptions scream NFL bust, but Winston should still be the number one pick.

Everyone knows that Winston comes with baggage, but he’s more of an NFL quarterback than Mariota is. As ridiculous as Mariota’s statistics were from a year ago, there is a growing suspicion that his game will not translate well into the NFL unless he is in the right situation. And by the right situation, that means playing for former-Oregon head coach Chip Kelly in Philadelphia.

That scenario can become quite likely if Mariota falls to the Jets on draft day, as the Eagles can offer some combination of Nick Foles, other players and draft picks to land their man. In that scenario, Mariota can definitely succeed. On the Bucs, however, Winston has to be the guy.

Although they were just 2-14 last season, Winston will be gifted some major offensive playmakers from day one. Wide receivers Vincent Jackson and Mike Evans are both big receivers who are serious deep threats to opposing secondaries. The Bucs offer Winston the greatest chance to succeed out of any other in the top 10.

Plus, keeping him in Florida would be an added bonus. Last year, the Houston Texans could have selected hometown hero Johnny Manziel with the number one pick but elected to draft Jadeveon Clowney instead. Clowney has since had microfracture surgery on his knee and Manziel checked himself into rehab following his lone season in Cleveland.

There is no denying that there are legitimate questions about Winston’s character and decision-making off the field. He has been caught shoplifting crab legs and is currently facing rape allegations, which could make prospective NFL teams terrified of selecting him.

Still, there is no denying his talent as a quarterback regardless of his behavior. When teams in the NFL evaluate players, talent is really all that matters at the end of the day. Neither Winston or Mariota is a lock in this draft – they could both wind up being terrible. But if the Buccaneers are going to take a flyer on one of them, Winston has a better shot to make the leap to the pros as long as he grows up a bit.