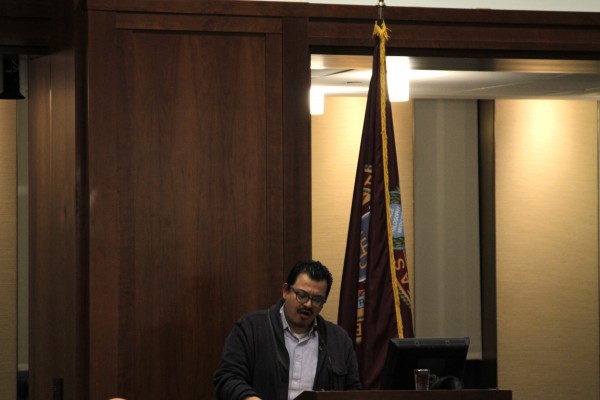 By RAMONA VENTURANZA and SRI STEWART

Three poets from different generations share something in common: their inspiration for writing stems from deeply rooted memories, experiences and views of the world. At Fordham College at Lincoln Center’s (FCLC) “Poets Out Loud” on Feb. 17, Alicia Ostriker, Eduardo Corral and Caroline Hagood read poems dealing with cultural and political topics that intrigued and inspired them.

Ostriker focuses her poetry on her experiences. But moreover, Ostriker also includes her own views of relevant issues into her poetry. According to Professor of English Heather Dubrow, director of “Poets Out Loud,” “[Ostriker’s work] is impelled by ethical and political concerns.”

“I write as a feminist in my poetry that has certain obsessions, views, feelings, emotions and thoughts,” Ostriker said. “As a poet, I write from a radical women’s point of view; that means many things, like religion, politics, motherhood, the body. All of my life, I have written poems about areas that were taboo – I’ve always wanted to break those taboos and speak what has been unspeakable in literature.”

Ostriker’s poetry of politics and religion stems from her identity as a Jewish woman in New York. In the poem from her new book, “The Wind that Blows Through Me,” evidence of her feminist identity is clearly shown.  In “They Speak of Race,” Ostriker’s politics of the equality of race is also revealed.

At the event, she presented poems from her latest book, “The Old Woman, the Tulip, and the Dog,” which, she said, was quite different from anything she has ever done. “Every poem is a trialogue with three characters; each character has something to say about. The dog almost always has the last word, and it’s a punch line. These poems are light in character, but they’re also deep as well as comical,” Ostriker said.

Ostriker also read some unpublished poems about her experiences in New York. “My husband and I just recently purchased an apartment in the city, so exploring the Upper West Side neighborhood has given me rise to poetry about the neighborhood,” she said.

Like Ostriker, Corral’s poems in his book, “Slow Lightning,” and more recent unpublished poems are meant to treat readers and audiences with beautiful imagery, as well as insight into his own experiences. For instance, in a collection of poems that have the same title, “Acquired Immune Deficiency Syndrome,” Corral mixes his own experiences with surreal imagery. “[These poems] have to do with surreal, lyrical and magical landscapes,” he said. “I like reading those poems because of the title; you have a title, and the poem does not sync up with what your expectations are.”

Corral draws much of his inspiration from growing up as a gay Latino from a small town in Arizona. “I was born and raised in southern Arizona, in a small town called Casa Grande; the town is about two hours away from the Mexican border. My landscape in Arizona is the desert – the dryness, floral and heat of the desert is all in my work,” he said.

In addition to the landscape, Corral also focuses his work on the people of Arizona. “In my neighborhood, there were a lot of Mexicans and Dominicans; [my poetry] also focuses on their struggles. A lot of people there would cross the border from Mexico to the United States undocumented; I talk about people who are border crossers, who work their way from the desert to the city.”

The third poet to present, Hagood, read narrative poems from her second book, “Making Maxine’s Baby.” According to Dubrow, “[Hagood’s] work contains dreams and a stream of consciousness.”

Hagood said her inspiration came from growing up in New York City and riding the subways. “I wondered what life down there in the tunnels might be like,” she said. As a result, she created the character of Maxine who is traumatized from an abusive childhood. Maxine deals with her experiences and pain through poesis in also a biological way; she needs to create a baby. Maxine recognizes “how close wonder is to horror,” and in this way she may find that beauty is behind her pain.

Both Ostroker and Corral hope to strike a chord amongst all audiences with their poetry. Ostriker said, “I hope [that my poems], for any audience, will make them laugh, cry, think and feel. I want them to think about what the poems say and how they respond to what the poems say. How does it apply in their life and what they encounter?”

For Corral, he hopes that his poetry sticks with readers and audiences. “Poems are not meant to be puzzles,” he said. “I would be happy if the audience would enjoy a word or an image; I want something from my poems to linger with the audience. I think that’s quite stunning.”