“The Skin of Our Teeth”: A Story of Humanity & the Individual 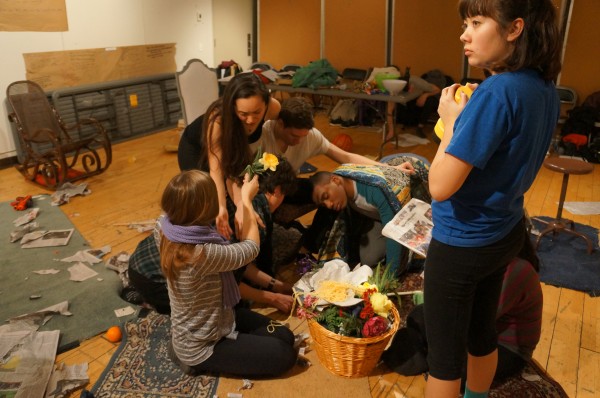 The cast of “The Skin of Our Teeth” challenges audiences to the power of humanity and the individual. (Jess Luszczyk/The Observer)

Fordham College at Lincoln Center’s (FCLC) Theatre Program would like to introduce the eccentric Antrobus family: the married couple of 5,000 years, George and Maggie Antrobus; their two children, Gladys and Henry; and their vampire maid, Sabina.

This Mainstage production will get audiences thinking about humanity and the power of the individuals, as this Eternal Family overcome ice, flood and war by the skin of their teeth. From Feb. 19 through Feb. 21, and again from Feb. 25 until Feb. 27, Thornton Wilder’s philosophical and thought-provoking play, “The Skin of Our Teeth,” will play in Pope Auditorium at FCLC.

According to the production team, which includes Production Stage Manager Kaleigh Bernier, FCLC ’16, Assistant Director Garrett Kim, FCLC ’16, and Narrator Marguerite Frarey, FCLC ’15, “The Skin of Our Teeth” aims to explore humanity. “The play aims to shed light on cyclical nature of history, as well as our reactions to [history],” Bernier said.

The play focuses around the perspective of the vampire maid, Sabina. Bernier said, “It’s not Sabina’s story, but rather, the story of humanity as told by Sabina.”

According to Kim, the story of the Antrobus family and Sabina spans from the Ice Age through World War II. “Basically, it’s about humanity and the will of humans to survive,” he said. “It poses a lot of moral, ethical and philosophical questions to the audience.”

The play’s narrator Frarey further elaborated on what the piece aims to convey to its audience. “This play has many, many themes. Some of these include: unconquered will, life as a series of threads, acknowledging the truth, family, language, the value of thinking and the rational mind, failure and catastrophe, the cyclicality of history and theater, the power of youth, the power of sex, survival of the human race and how we tell stories,” Frarey said.

Furthermore, Kim and the rest of the cast enjoyed working under the wing of the play’s director, Taibi Magar. As a recent graduate of The Brown University/Trinity Rep MFA Theatre Program, Magar previously directed Wilder’s “The Skin of Our Teeth” at the Trinity Repertory Company in Feb. 2014.  “I’ve been very fortunate as Taibi’s really invited me into her process, explaining her thoughts as we move along and giving me a chance watch her in action and try things out myself,” Kim said.

Frarey and Kim hope that the audience will make a deep connection with the characters and themes of “The Skin of Our Teeth.” “I want this play to expand our audience’s idea of what is possible. I want to make them think, to provoke them, to alert them. To heighten their awareness. I want the audience to take away a newfound kind of power in themselves as individuals and as a society. I want them to viscerally understand themselves as part of the storytelling and as part of the story,” Frarey said.

“I think audiences will come away with a lot of different thoughts and ideas; hopefully the play will get people thinking. I think ultimately, it’s a hopeful play about our will to carry on through tragedy,” Kim said.