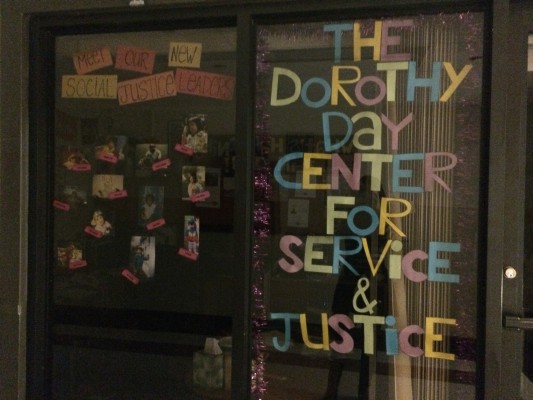 Pictured above, the training programs are led from the Dorothy Day Center of Service and Justice. (JASON BOIT/OBSERVER ARCHIVES)

On Monday, Feb. 9, the Department of Homeless Services (DHS) conducted its 10th annual Homeless Outreach Population Estimate (HOPE) Count. A hundred out of the 3,000 volunteers that canvassed the streets of New York City were Fordham students. The event gives the city an estimate of how many people do not have a place to stay.

Students gathered in McGinley Hall at 8:30 p.m for a preliminary seminar regarding homeless life in NYC, where they were instructed on ways to approach the people on the street followed by community builders and an opportunity to  practice asking the survey questions. Starting at 12 a.m., the students were divided into teams, each led by a veteran volunteer, and were assigned different parts of the borough to cover. Where DHS deemed necessary, police officers walked with the students to ensure safety. I canvassed areas in the East Bronx. The group of seven volunteers I participated in the event with were accompanied by three New York police offers and did not encounter anyone on the streets.

The event is organized by the Dorothy Day Center on campus, along with numerous Social Justice Leaders (SJL) at Fordham. One of those leaders is Kenice Miller, FCLC ’17, who participated in the count last year and returned to lead this year. “If you are looking to get involved but you don’t usually have the time, this is a great way to do it. It seems time consuming, but it’s only one night a year,” Miller said.

The DHS purposefully picks one of the coldest nights of the year for the survey. This year the Count was delayed from Jan. 26 due to the impending blizzard. Sandra Lobo, director of the Dorothy Day Center, said, “If there’s someone out there tonight, that is proof that they have no other place to stay.” The volunteers are instructed to offer anyone they encounter shelter. If the person desires shelter, the volunteers will call a van to come pick them up.

According to flyers handed out at the event, in Nov. 2014, NYC registered a record 60,352 homeless people. The primary cause of homelessness is lack of affordable housing. Due to the severe winter weather (Code Blue) warning in the area, the volunteers were requested to wake up sleeping people, who have set themselves up for the night. According to Lobo, this is only the second time a severe winter weather warning has been issued on the night of the Count.

Hanna Tadevich, FCLC ’15, has been a volunteer for three years. “Participating makes me feel motivated to continue working towards change,” she stated. “You get a connection to this world that is right outside our school. ”

To insure accuracy, some volunteers working with the DHS will dress up and strategically place themselves on the streets of the city to be addressed by the canvassing teams. These decoys will reply to the volunteers’ questions thoroughly, making sure that they are doing a good job and only afterwards reveal themselves. Former volunteer Winnie Berger, alumna FCLC ’14, says the event changed her view on homelessness. “Anyone of us can suddenly become homeless. It’s hard to survive in the city.” She said, “walking in solidarity with other people that care made me want to do more.”

Jim English, volunteer coordinator at the Xavier Shelter for Men on 16th Street and Sixth Avenue, believes the DHS is doing a good job. “The men are always positive when they come to the shelter, and our volunteers are hospitable.” Although the number of homeless people has increased in the three decades English has been volunteering there, the shelter’s capacity has remained the same and therefore the number of men staying there has not increased.