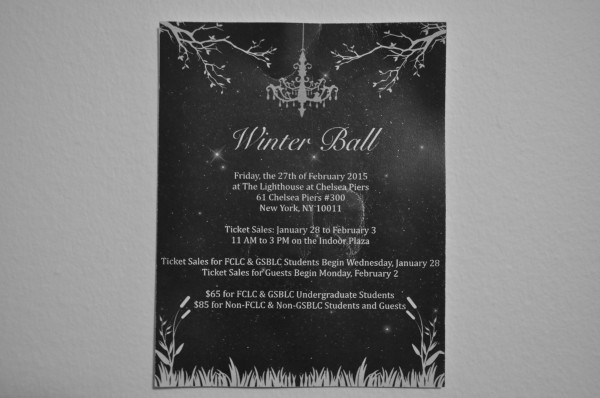 Fordham College at Lincoln Center’s (FCLC) Winter Ball Committee changed the school gala’s theme from “Arabian Nights” to “Winter Garden” after a conversation started by Zann Ballsun-Simms FCLC ’16, who expressed her concerns on Twitter about it being culturally insensitive.

Wenzel was alerted that students and alumni were expressing discontent with the theme on Jan. 22 and asked the co-chairs to initiate the meeting. According to all parties, the conversation was productive. Ballsun-Simms said her main concern with “making something Arabian-themed in the current political climate, with everything that is going on in the Middle East, is just generally problematic.”

An ethnic-themed event, “opens doors for people to be ignorant,” Ballsun-Simms said. “Someone could have shown up in a turban. It’s about not giving people the opportunity to be ignorant.” She did say after the conversation with Wenzel, Singh and Hartounian that she didn’t find their plans to be problematic.

Singh and Hartounian expressed gratitude that the possibility was brought to the committee’s attention. Hartounian explained that the committee was, “inspired by the colors the vibrant accents, jewel tones–things that are very much a celebration of what the culture is perceived as aesthetically.”

According to Wenzel, the theme was planned to “be inclusive and inviting, and I wanted to be responsive to the fact that that’s not how some students were perceiving what the theme was going to be.” Wenzel stated that other students came forward privately to discuss their concerns with theme, “so then we processed as a group.”

Another aspect of the conversation about changing the theme revolved around information provided in comment Jaime Rodriguez, FCLC ’14, that Fordham College at Rose Hill’s (FCRH) Residence Hall Association (RHA) discussed the possibility of making their Under the Tent theme “Arabian Nights” and subsequently made the theme “Kentucky Derby” for cultural sensitivity reasons. After a reflection, the committee made a collective decision to change the theme to Winter Garden.

The change in theme or the initial, possible culturally insensitive theme did not seem to negatively affect ticket sales as the committee met their minimum of 150 required attendees.

“Maybe it seems like I’m being oversensitive but as a person of color at Fordham, I feel like I’m more likely to recognize the microaggression,” Ballsun-Simms said. A microaggression is a form of unintended discrimination.

“I think it’s limiting to prevent the celebration of a certain culture or something just because a few people might go the right way about it,” Singh said. “If we did a Caribbean-themed [event] I would think it was beautiful.”

Disclosure: Tyler Martins, Editor-in Chief, is a member of the Winter Ball Committee.

This article was updated to correct the spelling of alumni Jaime Rodriguez and Zann Ballsun-Simms, FCLC ’16, and the byline of the author,  Adriana Gallina.