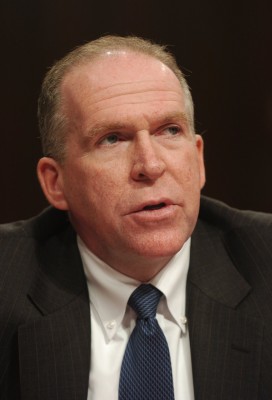 Father McShane and other senior administrators urged faculty not to move forward with the petition to revoke Brennan’s degree. (Courtesy of George Bridges /KRT via TNS)

Fordham faculty members have come together to create Fordham Faculty Against Torture (FFAT), an ad hoc committee formed in response to the report released by the Senate Select Committee on Intelligence on the Central Intelligence Agency’s (CIA) use of detention and interrogation policies. The committee has begun circulating a petition calling for Fordham to revoke the honorary degree conferred upon John Brennan, then Deputy National Security Advisor and currently Director of the CIA.

“In May 2012, despite the objections of both faculty and students, Fordham University awarded an honorary degree to John Brennan,” the petition reads. Other goals include “promoting reflection within the Fordham community on how our university can better live up to the values espoused in its mission statement” and “initiating a public dialogue on how, in the wake of the human rights violations committed by our government, we can advance the cause of restorative justice.”

The group formed after Rodriguez sent an email to some colleagues who had initially opposed the honorary degree in 2012, according to Hendler. “There was some e-mail discussion of how we might respond and how distressing it was that Fordham had given an honor to a man who was not only implicated in the act of torture, but who also continued to defend the actions of the government and refused to rule out torture in the future,” Hendler said in an email.

Bob Howe, senior director of communications, has declined to comment until the petition is delivered to the Board of Trustees of Fordham University.

The idea of a petition came about when someone asked what it would take to get Fordham to revoke the honorary degree from Brennan. “This idea became a focus of the discussion, and the seven of us started a separate e-mail discussion to write the petition and plan its distribution,” Hendler said.

Before circulating the petition among faculty, FFAT shared the document with Rev. Joseph M. McShane S.J., president of Fordham University, who requested that the group meet with him prior to circulation, according to documents attached to the petition. “At that meeting, which included President McShane, Provost Stephen Freedman and other senior administrators, they argued that we should not go forward with the petition,” the document states.

In a letter to McShane on Jan. 29, 2015, the committee responded that they intend to “move forward with our petition and to begin organizing a series of events on torture, human rights and restorative justice for this spring and the 2015-16 academic year.” The committee also responded to McShane’s suggestion that Brennan be brought to campus before the circulation of the petition, by stating, “After considerable reflection, we concluded that the kind of dialogue we seek would not be enhanced by Mr. Brennan’s presence.”

“We reached consensus – not so much that Mr. Brennan ‘would not add anything to the dialogue,’ but rather that his presence was not necessary for such a dialogue to take place,” Hendler explained. The committee wants to engage in restorative justice, Hendler said, and the “process of restorative justice has to start from an acknowledgment that a wrong has been committed. Mr. Brennan is a perpetrator of the wrong being discussed, and as far as I know has not acknowledged that fact.”

However, Hendler stressed that he does not believe that any of his colleagues think Brennan should not be invited to speak on campus. “We merely disagreed with the argument that such dialogue with Mr. Brennan should precede the circulation of the petition,” Hendler said.

According to Hendler, the response to the petition, has been “overwhelmingly positive, with more support than I think any of us expected.” The petition has surpassed FFAT’s goal of 150 signatures, and at the time of this publication over 215 faculty members and students have signed it.

For Hendler, revoking Brennan’s honorary degree is necessary. “By granting this honorary degree, Fordham has implicated itself in the practice and justification of torture – a practice that is in Catholic doctrine and nearly every other religious and ethical system considered an absolute evil in all circumstances,” Hendler said. “I can imagine no way of countering this implication better than revoking the honorary degree and publicly expressing regret that it was ever given.”

According to Hendler, FFAT has a number of ideas for events for later in the semester and for the next academic year. “President McShane has encouraged us to begin the dialogue called for in our petition, but has not provided any resources to help us do so,” Hendler said. “So we will probably start with events that draw on expertise here at Fordham, but I hope that other programs, departments and institutes – and student groups – will join us with both material support and help planning and organizing events.”

Hendler encourages students who want to get involved to sign and circulate the petition among the Fordham community. The petition can be found here. Students are also encouraged to reach out to one of the seven faculty members in order to volunteer and help plan discussions. “Our hope is not that the seven faculty members on this list will organize our own spectacular events that galvanize the community,” Hendler said, “but that students, faculty, alums and others recognize that this is an issue that strikes to the core of Fordham’s identity.”