It’s Too Early To Judge the Knicks’ New Leaders 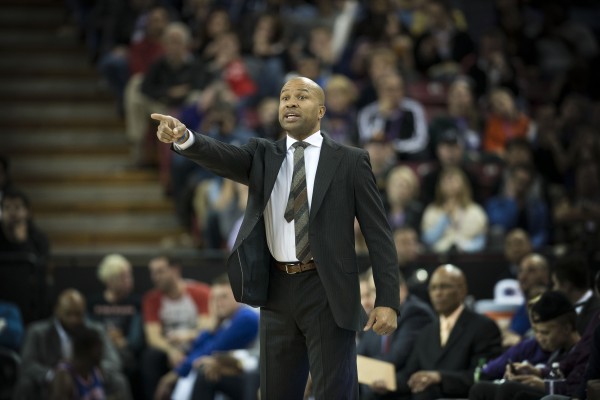 When Phil Jackson assumed the role of President of the New York Knicks organization on March 18, 2014, there was no way that he thought it would be this difficult. With the storied franchise spiraling into punchline territory at an abysmal record of 7-36 (even after back-to-back wins over the Pelicans and Sixers), many fans are questioning if Jackson and his protégé, rookie coach Derek Fisher, are up to the task. In a season in which Jackson promised a playoff berth, the Knicks are instead in serious contention for the worst record in franchise history. With injuries to Carmelo Anthony, Jose Calderon and the enigma that is Andrea Bargnani, the Knicks have not fielded their full roster for the entire season. These injuries, as well as ineffective play from recently traded J.R. Smith, Iman Shumpert and the released Samuel Dalembert, has doomed the 2014-15 squad into historically bad territory.

Despite the futility of the current Knicks, it is probably still too early to make a final judgment on Jackson’s executive acumen and Fisher’s coaching. The only true move that Jackson has made is the blockbuster trade that sent Raymond Felton and Tyson Chandler to Dallas for Calderon, Shane Larkin, Wayne Ellington, Dalembert and two draft picks. When considering the moves since then, this trade boils down to Felton, who has played in only six contests for the Mavs and Chandler, who has returned to form by averaging a double-double this season. In return, the Knicks received Jose Calderon, who is averaging a career-low in Field Goal Percentage and Assists, the promising prospect Shane Larkin and Cleanthony Early, who has not played enough to truly evaluate. Calderon has been seen as a disappointment this season, while Larkin has come to be the most impactful player of the deal for the Knicks, so many fans and sports pundits have looked upon this deal as a failure on Jackson’s part. Jackson made this deal to “improve team chemistry,” but with the plethora of moves since, there is not enough stability with which to form any chemistry.

Despite the Knicks unbelievable level of play thus far, the fan base should be patient with the organization in this period of transition. Under the regime of James Dolan, the Knicks made several imprudent personnel moves that mortgaged the future for an average present. The current state of the franchise as a “blown-up” rebuilding project is something that has been years in the making. Bad deals and questionable draft picks have been the team’s hallmark this millennium, so a change in operation was due. By moving out some of these bloated contracts and underperforming players, Jackson has taken the first painful step of moving the beleaguered franchise forward.

As a reward for this atrocious season, the Knicks will have a very high draft pick in this year’s NBA Draft, and the organization has also been salivating over the 2015 free agent class for the last few years. Players like Jahlil Okafor or Marc Gasol could be wearing orange and blue as early as next year. While the abhorrent record and lack of foundation, the Knicks hope that New York City and Phil Jackson’s track record are enough to draw a star or two to the Mecca of Basketball. Perhaps with a young prospect and another big-name talent to complement Carmelo Anthony, the Knicks can turn this around quickly. Despite the agonizing season the team has endured thus far, Jackson is doing the dirty work that should have been done years ago. While it is difficult to suffer now, Jackson’s Knicks embody the idea that the phoenix has to burn before it can rise from the ashes.