Point: Kobe to the Knicks? Not So Fast 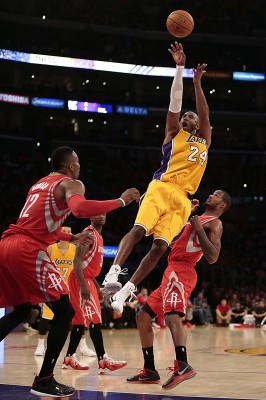 Kobe’s constant jump shots would hurt the Knicks more than it would help. (Photo Courtesy of Robert Gauthier / Los Angeles Times via TNS)

The New York Knicks have gotten off to an abysmal 4-18 start this season, and Kobe Bryant would certainly not be the answer to their problems. While the triangle offense has not been kind to the Knicks, adding another player that will only shoot would be a poor solution to their shooting woes. Team cohesion and chemistry is the cornerstone of this offensive scheme. Shipping off a few players and adding a controlling personality like Bryant’s would only serve to subtract from the minimal chemistry active in this team as it is.

There are many reasons for this lack of team cohesion. Keep in mind that, while the Knicks were supposedly attempting to remain competitive, this season was an unofficial rebuilding year, with hope for a quick turnaround. For about the last four years, the organization has salivated over the 2015 free agent class, and that still seems to figure into the Knicks’ plans. While Bryant has shown to be successful in the triangle in the past, it makes no sense for either the Lakers or the Knicks to make this kind of win-now, put-a-team-over-the-top type move when neither are close to contention.

While it may look like a good idea to add the fourth highest scoring player in NBA history  and reuniting him with his former coach Phil Jackson and teammate Derek Fisher, this reactionary move will not solve anything. While it might move some Knicks-Bryant merchandise, adding the 36-year-old shooting machine will not solve any issues. Outside of Carmelo Anthony, who is currently dealing with nagging back and leg injuries, the consistent three-point shooting of Pablo Prigioni and the resurgence of big man Amare Stoudemire, the Knicks have virtually no cohesion on either side of the court. Phil Jackson, before he took over as president of the Knicks, was quoted as calling the pairing of Stoudemire and Anthony “clumsy,” so what would he call it if Bryant were thrown into the mix?

In order to complete this hypothetical trade in the first place, the Knicks would probably need to put together a package involving Stoudemire and some of the team’s younger, developing players such as Iman Shumpert or Tim Hardaway Jr. Jackson sold the organization on a plan for the future, which would be mortgaged on a nonsensical move that might, but probably would not, alleviate some of the offensive burden. All of these players need the ball to be effective, so there is no way that all three of them can play together.

While the Knicks are in the league’s cellar as far as scoring, ranking 27th with 93.4 points a game, adding another high volume shooter like Kobe Bryant would not be a viable solution to the team’s current situation. The nine-time NBA All-Defensive First Team Laker might help on the Knicks’ perimeter defense, where they are sorely lacking, but the chemistry problem alone shoots down this wild fantasy before any serious consideration can be made. The triangle offense emphasizes passing, but usually revolves around one focal point. The team simply could not accommodate the offensive needs of  Anthony, Stoudemire and Bryant at once.