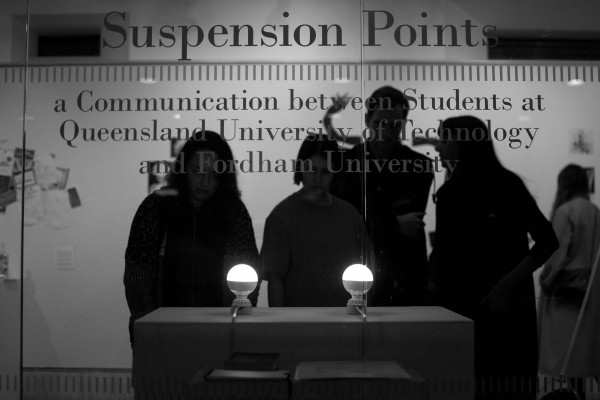 From old-fashioned to modern modes of communication, ranging from postcards to Facebook, there seems to be endless ways of reaching out to anyone. Separated by two hemispheres and one equator, students from Fordham College at Lincoln Center (FCLC)  and Queensland University of Technology, an Australian-based university,  use art to display both the challenging and availing aspects of receiving a message in the exhibition “Suspension Points,” featured now through Jan. 25 in Ildiko Butler Gallery at FCLC.

As part of their senior collaboration projects, students from both Fordham and Queensland selected three forms of communication, ranging from the postcard to the social media websites like Facebook and Instagram. Students would then produce a work of art in response to their correspondence with their respective partners. “[The students] were prohibited from contacting their partner through any other mode of communication, other than the one they had chosen,” Casey Ruble, Fordham’s artist-in-residence and coordinator of the senior collaboration, said. “There are no restrictions on them, other than the fact that they had to use their assigned communication format.”

For some students, it was easy to correspond with their partner on the other side of the world and create a provocative piece. “Our mode of communication was Facebook,” C. Sarah Strafford, FCLC ’15, said. “At first, [my partner and I] started chatting and found that we shared a lot of the same interests. Then, we thought, why don’t we think about communicating back and forth and how this can be interpreted.”

Because of this way of communication via Facebook, Strafford wanted to focus her project on the social media channel’s lack of privacy and how different types of people are perceived on it. “For the concept, I finally thought, why don’t I do a take on the kind of imagery that you see on social media – and we thought, printing out our conversations was the best way to go,” she said.

Similarly, Alexander Jahani’s, FCLC ’15, direct conversation with his partner via Twitter led to a piece that conveys his take on social media. “My project is essentially two LED light bulbs that are positioned right next to each other. I wanted to translate those Twitter conversations in a simple way, to say that, these are signals of communication and a message. And although these messages are under 140 characters, they are still a message,” he said.

In the class, some students chose a mode of communication that prevented them from talking to their partner on the other side. As a result, they were faced with the challenge of creating an art piece out of that miscommunication. “I chose my medium of communication to be message in a bottle,” Tochi Mgbenwelu, FCLC ’15, said. “I knew that I was never going to be communicating with my partner because messages in a bottle don’t work like Skype.”

Mgbenwelu used film to show her experience using this mode of communication. “I recorded my experience going to Coney Island and throwing the message in the bottle in the water. I also did the same thing at the Hudson River.”

According to each of the Fordham students, this project unexpectedly brought them and their Australian partners closer together.

Even with a public forum like Twitter, Jahani was able to form a close connection with his partner. “My partner and I would send each other direct messages – it was a more intimate way of communicating, because we got to learn about each other,” he said. “We talked about things I didn’t necessarily affect the project directly. But, we got to talk about our approach to the project and what one thought about the other’s piece.”

For Mgbenwelu, she was able to learn a lot about her partner through their mode of communication. “My partner brought five bottles and she wrote me 20 letters – each letter representing each year of her life. She put four letters in each bottle and shared secrets in her letters that she didn’t want to share with anybody. Initially, she was going to throw them in the water, but then I told her that I am going to read these,” she said. “She shared really deep things in these letters, and it was nice to know that I am the only other person who knows these things.”