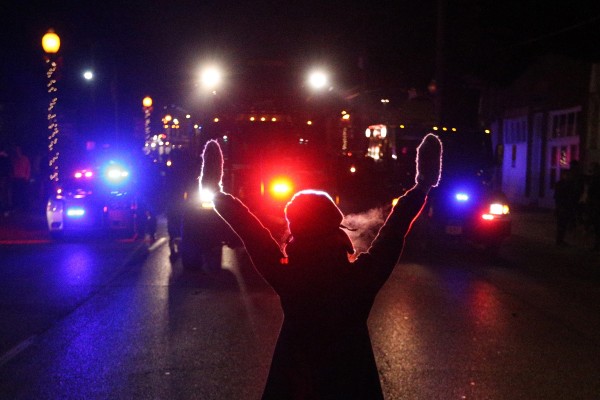 A protester raises her hands in the street as police use tear gas to try to take control of the scene near a Ferguson Police Department squad car after protesters lit it on fire on Tuesday, Nov. 25, 2014, in the wake of the grand jury decision not to indict officer Darren Wilson in the shooting death of Ferguson, Mo., teen Michael Brown. (Anthony Souffle / Chicago Tribune/TNS)

As of Nov. 25, the case of Darren Wilson’s fatal shooting of Michael Brown reached a verdict before the grand jury: no indictment. Similarly, on Dec. 3, in the case of Eric Garner vs. Officer Daniel Pantaleo, the grand jury followed the harmful precedent set in Ferguson, Mo.

As a woman born and raised in New York who has an older brother, two African-American brothers-in-law and two young biracial nephews, I am without a doubt disgusted with how our courts have handled these injustices. The plain and obvious reason is because of my family—my nephews will be considered black men in this country, and will subsequently be targeted much like Brown and Garner were, and I am scared for their lives here in America.

The case of Michael Brown shocked me: The way the media maligned his character (ignoring the fact that he was entitled to his life whether or not he robbed the convenience store or did well in school or any number of things) and the lack of an adequate medical response points to a larger problem. Garner, a Staten Island resident, was shown in a video holding up his hands and was clearly unarmed and not seeking trouble. After being placed in a fatal chokehold, he said 11 times “I can’t breathe.”  In various different videos the end result is the lifeless body of Garner:  But even if he was a threat, there are countless (both nonviolent and definitely nonfatal) ways to detain someone. I am sure that the New York Police Department (NYPD) is capable of addressing a threat without resorting to lethal force.

We are all taught at some point in lives as children to turn to authorities for help when we need it, but if these past few weeks have taught us anything, it’s that these authorities are deeply flawed.  I do not know whether or not I am safe enough to do so anymore. I do not know what to think and feel. I look at my nephews and only want to protect them from the world around them.

I had the opportunity to see protesters take over Rockefeller Center on Dec. 3: The sight of so many individuals from different racial backgrounds, genders and ages coming together to speak out against the injustices taking place inspired me to want to be more active, and also gave me hope that we can make a meaningful difference.

I am not surprised at the decisions reached by the grand jury in either of those cases, and perhaps that’s part of the problem: People are losing hope in the men and women who enforce the law, make the law and punish those who break it. The justice system has to do better and its agents should know better. Officers of the law should be reprimanded if they kill, and each such case should be investigated with the utmost diligence, regardless of the skin color of the victim. They above all else know what the laws are and taking another man’s life is the greatest transgression against them. We all need to do better, be better together and stand together against this injustice.