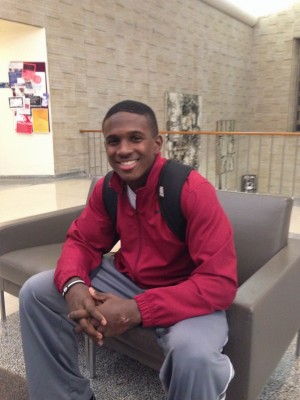 Chase Edmonds, Fordham College at Rose Hill (FCRH) ’18, is the Fordham and Patriot League record holder for most single game touchdowns and rushing yards.  He’s also a freshman with little more than half a season of college football playing experience. Edmonds has been selected as a candidate for the Jerry Rice Award, given to the top first-year player in the Football Championship Subdivision (FCS). He has also contributed to a Fordham football team on the cusp of a Patriot League championship and a FCS playoff berth. Edmonds sat down to speak on his beginnings, his individual success and the success of the team this season.

The Observer: You’re from Harrisburg, Pennsylvania and you played high school football for Central Dauphin East High School.  What was it like growing up there?

Edmonds: It was a blessing growing up and playing there.  From when I was 6 years old, I played with the same teammates so there was a strong brotherly relationship between all of us. In fact, my coach from my senior year in high school was actually my head coaching when I was six too. We were all a big reunited family for my senior year. It made it sort of difficult to leave and to come to Fordham.

The Observer: Why did you decide to play for Fordham?

Edmonds: When I was being recruited by Coach [Joe] Moorhead and Coach [Andrew] Breiner, they made me feel at home. In addition to that, I love the spread offensive scheme and fast tempo that the team plays at. Also, after football you need to find something to do and in New York City, you can never be bored. That really attracted me.

The Observer: Over the last few years, Head Coach Joe Moorhead has developed a team best known for its dynamic offense. How has it been learning from him and playing within Fordham’s offensive system?

Edmonds: You don’t understand how much you need to pick up at the next level until you actually get here, but I’ve learned so much from the coaches already, even though I’ve only been here about four months. They show us different schemes to diagnose and break down defenses where a team is running a Cover Two or a Cover Three. It’s been a great learning experience.

The Observer: The team you joined this year is filled with veteran leaders and seniors such as Sam Ajala, FCRH ’15, and Mike Nebrich, FCRH ’15, who have been playing together for a long time. How were you able to mesh so quickly with them and become an integral part of the offense?

Edmonds: When I made my official visit to Fordham, Sam [Ajala] was actually my host, and I met other players like DeAndre Slate and De’Nard Pinckney so by the time I arrived to play, I already knew faces. Sam in particular really took me under his wing, and I consider him a big brother. Mike [Nebrich] is another guy who’s taken me under his arm and helped me learn which was really important because, as a freshman coming in, we didn’t have time during the spring to work and practice. Overall, it’s been great working with these guys and bonding with them on and off the field.

The Observer: Against Villanova, you only ran for negative five yards, but the week after against Rhode Island, you set the school record with 231 rushing yards. How did you bounce back so quickly and put on such a historical performance when most first-year players might have had some confidence issues?

Edmonds: I have to give all the credit to my offensive line. They did a great job of blocking and opening up multiple running lanes for me. The Villanova game was a bad day for the whole offensive unit. We got dominated, but it humbled us and just made us more hungry. After that we knew how hard we had to work every day to be the best.

The Observer: On Oct. 25 against Lehigh, you set the school record with five touchdowns in one game.  What was that game like, and how does it feel to hold such a record in only your first season?

Edmonds: Any type of success I have, I don’t take it for granted so I just feel blessed and give God the glory. It felt great, and I knew it was going to be a pretty good day day after I had scored the third touchdown. I was with Nebrich on the sidelines and we were joking around that I had taken all of his “money” that game because of all of my goal line carries.

The Observer: You’ve also been nominated for the Rice Award given to the best freshman in the FCS. How do you feel your chances are?

Edmonds: Our coach always tells us not to read our press clippings, and he’s right because that’s when people can get conceited and content. I just want to be the best football player I can be and push myself every single day. I’m never satisfied or content with my performance, and I’m not focusing on individual awards or records. As long as we win out, everything will take care of itself.

The Observer: The team is 11-1.  The offense has the highest scoring totals in the league and is ahead of second place by 68 points. What do you envision for the rest of this season, and how do you believe you and the team can improve?

Edmonds: I envision that we take it one day, one practice and one rep at a time. We try not to look to far into the future because that’s when teams get too caught up. Coach Moorhead emphasizes process, so as long as we take everything one day at a time, we’ll be fine. It’s easier said than done and we don’t underestimate anyone, but as long as we keep working hard, we can win the Patriot League Championship. I think we’ll be alright.