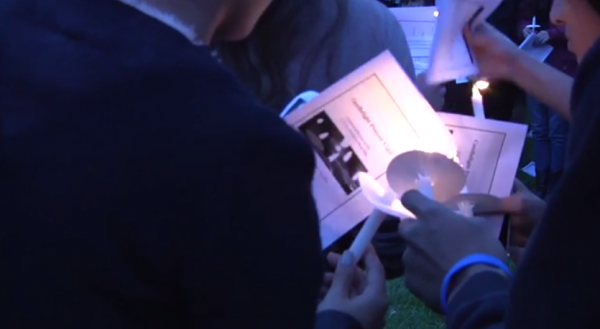 On Tuesday, October 28, about 75 students attended a candlelight prayer vigil in remembrance of the victims of police brutality on McGinley Lawn at Fordham College at Rose Hill (FCRH).

Brandon Mogrovejo, FCRH ’15, double major in biology and African American studies, organized the event with the help of the Dorothy Day Center at FCRH, who helped secure the lawn space and provide other necessary materials.

As candles were lit, students and faculty announced the names of people who died by police, followed by “we remember” recited in unison.

Campus ministry donated the candles for the vigil. The vigil featured not only Christian prayer by Rev. Mark Chapman, associate professor of african and african american studies, but Islamic Prayer and a Hindu pray led by students.

In attendance was John Carroll, associate vice president of Fordham public safety, who was a member of the New York Police Department for almost 30 years.

“I think the vigil was very well done. It’s very important for our students to consider all injustices in life and look to correct them,” Carroll said.

“I think it is very important for our students to be concerned, like Father McShane tells them to be all the time. To be leaders in our world and to be men and women for others. I think that’s what our students were trying to do tonight,” he continued.

No other events are yet planned, but the students who attended the vigil hope to continue the dialogue of police brutality on campus.