November is the Month of El Greco 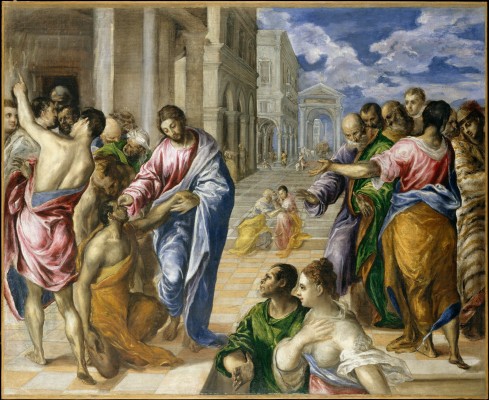 From Nov. 4 through Feb. 1, two prominent New York City art museums, the Frick Collection and the Metropolitan Museum of Art, will contemporaneously showcase the artwork by the renowned Spanish artist of the 17th century: El Greco. The openings of these shows mark the 400th anniversary of the painter’s death.

Both upcoming exhibits will display the Spanish painter’s collection. Furthermore, the exhibits follow El Greco’s progress throughout the years of training and practice, from Crete to Venice and then finally Spain. According to Jack Spalding, associate professor of art history at Fordham whose area of specialization is the Renaissance, El Greco made a smart career move by training in different cities and finally locating to Spain.

“[El Greco] was in Crete, but he was training primarily in Venice. After he practiced in Venice for a while, the artist moved to Rome and then Spain. When he got to Spain, El Greco didn’t have any competition at the time, in 1576,” Spalding said. “He was the only one important there in Spain during this period.”

Being the only significant artist in Spain at that time, El Greco’s approach to paintings was viewed with a whole new set of eyes. “With the result of his style, he was a little bit more extreme because there weren’t any painters there of his stature,” Spalding said. “Paintings before El Greco were very medieval.”

In addition to being the only artist of his kind in the 14th century, El Greco set himself apart through his radical approach to paintings. “El Greco is the most established mannerist of all time. He basically focused on a style that looked very modern – he was way ahead of his time,” Spalding said.

Popular amongst artists in the Renaissance, the style of mannerism deviates from naturalistic proportions and portrays artificial qualities; mannerism gave El Greco the freedom to play with his imagination. As evident in El Greco’s paintings, mannerism displays compositional tension and instability. “Mainly, El Greco was important for introducing the most avant garde style: ancient styled, art mannerism. His style was more modern of the artist of his time, and his method of mannerism was the most extreme,” Spalding said. “His figures were the most elongated, and some of his compositions were the most elaborate.”

El Greco’s unique approach to mannerism was evident in the subject matters in his paintings. “Most of his paintings were religious, like ‘The Purification of the Temple,’ ‘The Assumption’ and ‘The Feast in the House of Simon.’ He also did that famous landscape, ‘View of Toledo,’ which is a very important city when he was painting and training there,” Spalding said.

According to Spalding, there were no artists that took influence directly after El Greco’s death. “El Greco’s extraordinary style of painting was very soon replaced thereafter in Spain, when the next generation of artists were quite different. There were artists after El Greco who painted in a very devout, simplistic style; it was totally different from the artist. Afterwards, the most famous Spanish artist in the middle of the 17th century was Velasquez; his style was much less mannerism, and his style was much based off Baroque style,” Spalding said.

Years after the height of Velasquez in the Spanish Golden Age, El Greco’s collection of work was rediscovered. “El Greco was basically rediscovered in the 20th century, when the style of his practice, mannerism, because really popular in the 1920’s and the 1950’s. He was definitely an artist that people forgot about for a while, then he got rediscovered, especially with the growth of art history in the 1840s.”

El Greco’s atypical approach to style and composition has made him one of the few master painters who achieved widespread popularity, according to Spalding. “Everyone knows who El Greco is. For a lot of people, when you ask when you ask who your favorite artist, they reply El Greco.”