US Strategy in Syria is Untenable 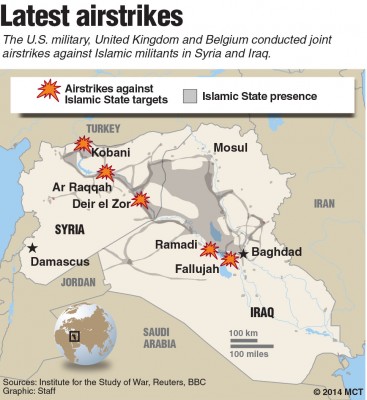 (Illustration by Good via MCT)

The United States and allies have begun conducting airstrikes against Islamic State targets in Syria, and Congress has authorized $500 million to train and equip “moderate” Syrian rebels. Curiously, we have chosen to inform the de jure Syrian government, nominally our enemy, in advance of airstrikes. As we’ve formally begun to actively participate in two countries’ civil wars, I think it’s time we ask exactly what the United States is about to fund and why.

The Syrian Civil War, now in its third year, is complicated to say the least. The average war has two sides, but its Wikipedia article divides the belligerents into five factions, and the conflict has spilled over into Iraq. American intervention, meanwhile, is spilling from Iraq into Syria. I think it’s worth examining who these factions are in order to realize what we’re getting ourselves into. Wikipedia’s writers have chosen to group the United States, our Arab allies and our Western allies as its own faction, since we are now actively participating in the war instead of just giving weapons and cash to a faction. The Syrian Kurds are also considered their own faction, and they are mostly supported by the Iraqi Kurds, who are of a shared culture and have a mutual enemy in the Islamic State. But the Western-Arab intervention coalition and the Syrian Kurds cannot win the Syrian Civil War. They will not rule a post-war Syria. The important players here are the Syrian government/Assad regime, the Syrian rebels/opposition and the Islamic State/ISIS/ISIL.

I’ve listed them that way for a reason. This is perhaps one of the grayest conflicts in Middle Eastern history. And we’re throwing our weight behind one of those factions, even though the positions of each side are fairly indefensible from the Western liberal democratic perspective. Assad is a sectarian dictator who, regardless of his track record before the war, has caused thousands of deaths at the hands of his military. He’s primarily backed by Russia, Iran and Hezbollah (Lebanese Shia paramilitary), so the United States can’t support him in good faith. The Syrian rebels, who we’re trying to sort into moderate opposition and I guess “non-moderate opposition,” literally include al-Qaeda, our old friends from the Soviet Invasion of Afghanistan. Other rebels are nominally Islamist but apparently “moderate” enough. How are we supposed to vet these people for reliability? What makes a rebel moderate? Many have defected to the Islamic State and the only common principle they share is opposition to Assad, and we like to think, the Islamic State. They’ve also committed atrocities against civilians, much like Assad, but not to the extent of the Islamic State. The United States has picked the Syrian rebels as our favorite faction.

And finally there’s the Islamic State, the terrorists formerly known as ISIS/ISIL. They are more of a rogue state with a terrorism department than terrorists at this point and very wealthy to boot. For better or worse, the United States has chosen to engage them in Iraq. But the Islamic State also de facto controls territory in de jure Syria. Their nominal capital, Ar-Raqqa, is in Syria. To fight the Islamic State, you have to attack its territory, which falls on both sides of the Sykes-Picot borders drawn in the Levant after WWI.

Fighting the Islamic State in Syria is one matter. It is another matter entirely to fund the Syrian opposition. They are the arguably the only non-state actor among the three main factions. Syria is a state. The Islamic State is a state. The rebels are a coalition of insurgents. Who are they accountable to? The Istanbul-based Syrian National Council, comprised of revolutionary exiles, has minimal influence in Syria and not even all of the rebel groups recognize it. Once we train and equip whoever we deem moderate and send them off to fight the Islamic State in Syria, it’s unclear what happens next. Or maybe not. Think Vietnam or the Second U.S.-Iraq War, except few or no actual U.S. troops will be involved, just our handpicked locals. We do have antecedents of what funding rebels looks like. The spectacularly successful Bay of Pigs invasion of Cuba removed the Castro regime from power, and today Cuba is a bastion of Western democracy and free market capitalism—wait, that’s not right at all. There were also the Contras in Nicaragua, who swiftly toppled the communist Sandinista government and did not fight a 10-year civil war consisting of massacres, reprisals, torturing civilians, raping, drug-trafficking and attacking medical personnel. And then there’s the mujahideen of Afghanistan, whose members later planned and executed the 9/11 terrorist attacks, bringing our proxy wars home for the first time. This time will be different!

Maybe I’m being too pessimistic. Maybe the Syrian rebels will manage to topple both the Russian-backed Assad and the wealthiest terror state in history and go on to draft a constitution guaranteeing human rights for all Syrians. They’ll even appoint rehabilitated Baathists to power. Or maybe the rebels will become cannon fodder on the Islamic State’s western front so we can reconquer Iraq more easily.