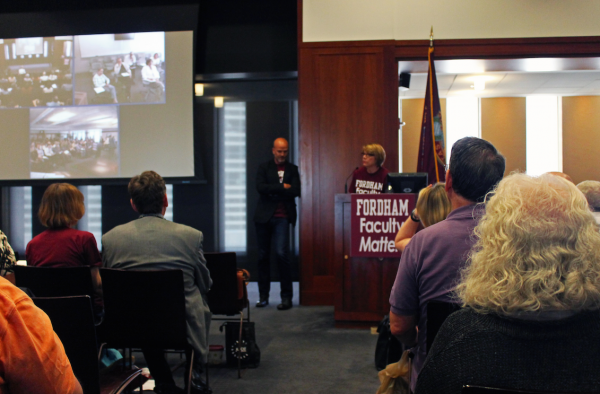 John Lordan, senior vice president and chief financial officer, stepped down after 14 years of employment on Monday, Sept. 15, according to a statement from Rev. Joseph M. McShane, S.J., president of Fordham University, to all faculty and staff. Lordan’s resignation comes days after the Faculty Senate unanimously censured him for violating the University code of Conduct, on Friday, Sept. 12.

According to the Faculty Senate Action Minutes #403, Lordan violated the code of conduct of the University by attending the faculty wide meeting, held on Wednesday, Sept. 10, concerning health care negotiations between the Senate and the administration, “by limiting through intimidation the free expression of ideas by members of the faculty,” and by refusing to leave the meeting when asked by a member of the Faculty Senate.

According to Patrick Hornbeck, Ph.D., chair and associate professor of theology and Faculty Senate member, the Faculty Senate’s intention in passing this resolution was to state that Lordan was not representing a sense of the relationship that should exist between administrators and faculty members. “The purpose of the resolution was for the Senate to put on record that what Mr. Lordan did was inappropriate and a violation of the standards that we hold together at Fordham,” Hornbeck said.

The action against Lordan is the first censure on the Faculty Senate in at least the past eight years, according to Hornbeck, who has served as a member of the senate for that time.

Subsequently, a vote of no confidence was taken against Lordan and the Faculty Senate has requested “that the President of the University directly represent the Administration in negotiations concerning faculty salaries and benefits.” Negotiations between executive members of the Faculty Senate and McShane have taken place on Friday evening and Tuesday, Sept. 14, according to Hornbeck. “In the leading days since, the administration has been directly represented by Fr. McShane,” Hornbeck said.

The Faculty Senate, convening in 12th floor lounge of the E. Gerald Corrigan Conference Center at Fordham College at Lincoln Center (FCLC), also unanimously rejected the Administration’s proposal concerning faculty salaries and benefits. “When you look at all these resolutions together, what you see is a faculty united behind a principal that faculty need to be fairly and competitively compensated,” Hornbeck said.

Though Hornbeck believes that no new proposal will be put forth before the next Faculty Senate meeting on Friday, Sept. 19, he remains optimistic that a deal will be reached. “Our hope is that we will, in fact, reach a mutual agreement prior to the open enrollment that will begin on Oct. 10, from what the University has told us,” Hornbeck said.

Hornbeck believes that the Faculty Senate fulfilled its roles of representing the needs of the faculty at Fordham. “Higher education in America is going through a whole bunch of changes right now and we want to be absolutely sure that the things that help faculty thrive, the things that help faculty be good teachers and good researchers, are taken into account as Fordham steps forth in its financial priority.”

These actions follow allegations from that Faculty Senate that the administration has been negotiating in “bad faith,” choosing UnitedHealthcare without the approval of the Faculty Senate. According to Andrew Clark, Ph.D., associate professor of French and comparative literature, vice president of the Faculty Senate and chair of the faculty salary and benefit committee, negotiations between the ad hoc committee and the Administration have been “rather disgraceful, in terms of the types of negotiations that have taken place.”

According to Clark, there were multiple times in which the Faculty Senate’s ad hoc committee would have to refer to transcripts of past meetings that they recorded because administration would seem to agree with one stipulation, only to disagree at a subsequent meeting.

The Administration finds these allegations “dismaying,” according to a Fordham spokesman.

Twenty to 25 faculty members, according to Hornbeck, attended the meeting, which began at 12:34 p.m. and adjourned at 3:59 p.m.

Read more of The Observer’s coverage of the negotiations between the Faculty Senate and the administration.