Fordham Celebrates the Class of 2014 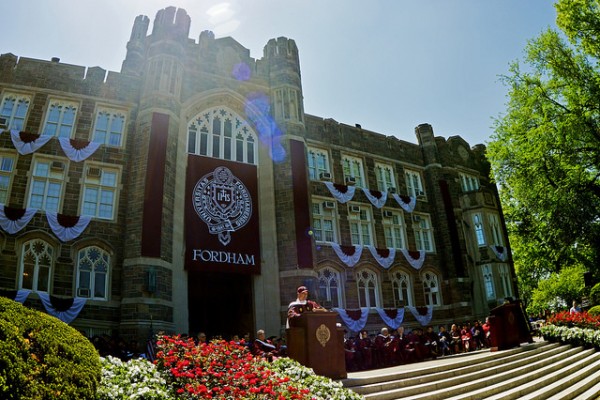 On Saturday, May 17, the 169th Commencement Ceremony of Fordham University took place at Fordham College at Rose Hill (FCRH). Families and friends gathered in front of Keating Hall for the commencement, which began with the traditional ringing of the Victory Bell, first rung by President Harry S. Truman in 1946.

“We welcome you back to the borough of your youth. We are proud of you,” Fordham President Joseph McShane, S.J. said when conferring Justice Sotomayor with her honorary degree. McShane then presented Sotomayor with a monogrammed baseball from Martinez. In turn, Martinez received an autographed copy of Sotomayor’s book, “My Beloved World.”

“Go out and swing for the fences,” Martinez said in his commencement speech to the graduates.

“You are grace to us,” McShane said, delivering the final remarks of the Commencement ceremony, preceding each college’s diploma ceremony.

The diploma ceremony for students of Fordham College at Lincoln Center (FCLC) took place on the lawn of Walsh Library. “Congratulations. You have done it. You didn’t do it alone,” Rev. Robert R. Grimes, S.J., dean of FCLC said, leading the graduates in applause for their families. “Relish it. Cherish it. Put aside your fears.”

The Observer partnered with Fordham Compliments to create this love letter for the FCLC Class of 2014.