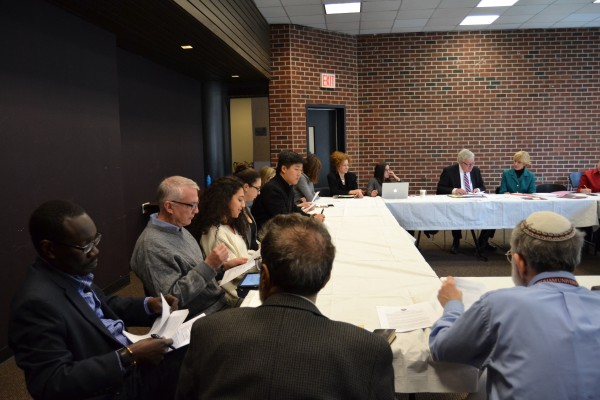 On Thursday, March 13, the Commuter Student Association (CSA) presented the members of the College Council with a list, titled “10 Things Commuter Students Would Like Professors to Know About Us.” The list details certain issues that commuter students at Fordham College at Lincoln Center (FCLC) deal with regularly.

“We represent the commuter students of FCLC who, like most of you, commute to Fordham,” the list reads. “Here are a few things we would like to share about ourselves.” The issues are broad, ranging from familial obligations and train troubles to “competing demands on our time.”

CSA Treasurer Christina Dellaporte, FCLC’ 15, drafted the list after having been approached after a College Council meeting by Associate Chair of Sociology Jeanne Flavin. “[Flavin] was worried that she doesn’t always understand some of the struggles that commuters have,” Dellaporte said. Flavin suggested that Dellaporte create a list documenting many of the issues that commuters face.

“I asked everyone who came [to CSA meetings] to write down a few things that they wish professors would know or something they struggled with about commuting,” Dellaporte said. According to Dellaporte, approximately 20 commuter students attend each CSA meeting. “I read through all of them and there was actually a consensus among some of them and I put this together.”

After the list was completed, it was reviewed by the CSA executive board and reviewed by various faculty members, including some in the Office of Student Leadership and Development (OSLCD).
“Anything we can do to help any of our students, and in this case in particular, commuter students be more successful is certainly something I want to support and be a part of,” Keith Eldredge, dean of students at FCLC, said.

When presented at College Council, the reception was warm and sparked dialogue among faculty, Dellaporte said. “They kept asking me questions and it started a whole new conversation about other issues. I brought up certain issues for commuters that residents also have to face, and that started up a whole new conversation about how we all need to approach the situation a little differently.

“I was just happy that we could get everyone talking,” she said.

After the list was presented at College Council, it was distributed electronically to all FCLC faculty by the office of Dean of FCLC Rev. Robert R. Grimes, S.J.

According to Eldredge, reactions from the faculty were positive. “They appreciated the students taking the time, not only to draft the proposal but to bring it to the council,” Eldredge said. “The faculty members talked about how it resonated with their own experiences and how they would like to make sure that students feel they are getting the best education they can in the classroom, so anything they can do to support that was something they’re interested in.”

Faculty members present at College Council were surprised to hear about the issues that commuter students face. “[The list of commuter problems] was really eye opening for me. I never really thought about it before listening to [CSA’s] presentation,” Associate Chair of Communications and Media Studies Gwenyth Jackaway said.

“We did not know the extent of this issue. We know that commuters have special concerns—it was very eye opening. I wish I knew this earlier. I thought that I could do more in my classroom to be more welcoming,” Associate Chair of Undergraduate Studies Hector Lindo-Fuentes said.

Other commuter students find the list to be “whiney” and devoid of solutions. “I understand that CSA is the representative of [the commuter community]; I don’t have a problem that they can’t go around to every student,” Marina Elgawly, FCLC’ 16, said. “But CSA’s letter comes off as whiney. ‘Understand that we have many competing demands right now,’ is whiney. Well, welcome to college. When you’re supposed to balance an internship and/or work, plus school, it is expected of you. This is expected; you try to make the most out of it, academically and socially.”

“Some of [the complaints], you should have expected as a commuter,” Angel De La Cruz, FCLC ’16, said. “What are they going to do; make my commute shorter? I can understand there being some kind of complaint, if there is some reason for the complaint. I don’t understand where [CSA] is going with this,” he said.

“This isn’t asking for special treatment. It’s asking to be aware with what is going on with us. We didn’t want professors to change formats of classes, or change their teaching style necessarily,” Dellaporte said in response. “We can’t ask them to do that; that’s completely ridiculous.”
“It’s important to talk about these issues and how they affect people,” she said.

Though commuter students have questioned if the University is working to find solutions to these issues, the Administration doesn’t believe that there are any tangible solutions. “I don’t know if there is anything here to be in control of the college to rectify,” Grimes said. “I can’t make the Metropolitan Transit Authority to run on time. I can’t tell parents how to raise their children.”