Income Inequality Hurts Us All 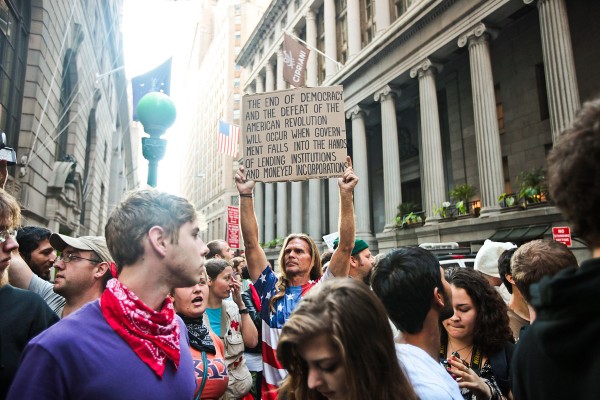 Protesters take to the streets of Lower Manhattan to celebrate the first Anniversary of the Occupy Wall Street movement in Manhattan on September 17, 2012. (Courtesy Byron Smith/Zuma Press via MCT)

In the midst of a slow recovery from the worst economic crash since the Great Depression, Occupy Wall Street—and its counterparts in cities throughout the world—made this slogan the rallying cry of the non-rich, sparking a national conversation about inequality in the United States.

Arthur C. Brooks, president of the American Enterprise Institute, a conservative think tank, thinks that the progressives in this national conversation simply envy the one percent. In an op-ed for the New York Times, Brooks wrote that “a national shift toward envy would be toxic for American culture,” and that such a shift is already underway.

On the other side of the conservative straight cis white-guy spectrum, venture capitalist Tom Perkins does not see it as envy but rather as hatred. Comparing criticisms of America’s one percent to the Nazis’ war on Jews, Perkins wrote in a letter to the editor of the Wall Street Journal: “I perceive a rising tide of hatred of the successful one percent.”

No, Mr. Brooks, we don’t envy you. And no, Mr. Perkins, we surely don’t hate you. (Also, don’t compare anything to the Nazis except the Nazis.) But what do we hate? We hate injustice. We hate that the system is unfairly rigged to benefit the rich.

The richest 400 Americans own more wealth than the bottom 150 million—nearly half the population of the United States. Since 1979, while the average after-tax-and-benefit incomes of the one percent have grown by 275 percent, the rest of the population has seen only about a 40 percent increase. In the last century, income inequality was the highest in 1928 and 2007—the years before the two worst economic crashes in our nation’s history. During our nation’s most prosperous and productive period (the three decades after World War II), income inequality remained at its lowest point, and taxes on the highest earners were never below 70 percent. In fact, when Republican Dwight D. Eisenhower was president, the top marginal tax rate was 91 percent.

We don’t want to tax the rich because we envy them or because we want to punish their “success.” As a country that prides itself in offering the “American Dream,” it is our responsibility to help the disadvantaged members of society. If we think that a poor black woman who grows up in the Bronx can free herself from the endlessly vicious cycle of poverty to achieve a comfortable middle-class life, then we must use tax dollars from the rich to facilitate her climb up the socioeconomic ladder. We cannot expect her to “pull herself up by her bootstraps,” as privileged right-wingers love to say. We must provide an effective social safety net. With our existing tax code, an effective social safety net is impossible.

Conservatives argue that we should lower taxes on the rich because they are the job creators, the business owners and the entrepreneurs. Raising their taxes will discourage them from hiring more people. That may seem like a good argument, but it’s not. The real job creators are the people in the middle class. Their spending as a whole is what creates jobs. Personal consumption accounts for more than two-thirds of the economy. Compared to the poor and middle class, the rich actually spend too little of what they earn. One person can only buy so many pillows and only get so many haircuts. They don’t generate enough economic activity because they save so much money. According to Moody’s Analytics, each time the rich received a tax cut from President George W. Bush, they increased their savings rate and did not increase spending. That saving creates absolutely no social utility.

The theme of “Inequality for All,” the new documentary made by Robert Reich, former secretary of labor, is that inequality hurts us all. Inequality ruins our democracy. The rich have an insanely disproportionate share of wealth, making certain resources available only to them. Because of the Supreme Court case Citizens United v. Federal Election Commission, corporations and labor unions can give as much money as they want to political candidates. The rich can buy access to politicians—politicians who pass legislation that often benefit their rich donors. The system is rigged. The system is broken. We must end money’s influence in politics and invest in the middle class.