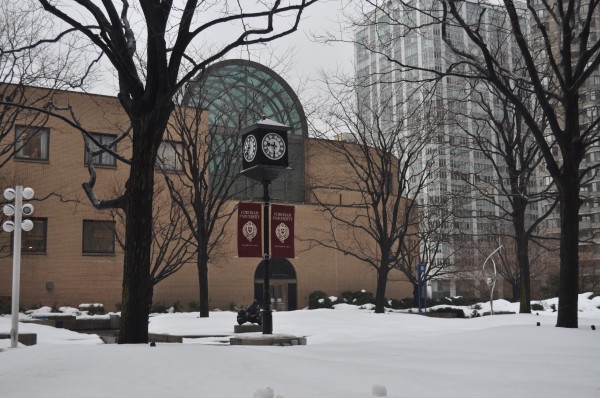 Due to inclement weather, Fordham College at Lincoln Center (FCLC) had to cancel four days of classes this spring semester. However, some students and professors criticized the University for canceling too many class days.

According to Associate Vice President of Safety and Security John Carroll, Fordham was closed necessarily due to the snowy weather conditions. “[Security] had to check the safety of the campus and how safe it would be [for students and faculty] to travel,” he said.

“At the middle of the night, [security] checked on the current condition of each of the campuses and whether it was safe for students to travel around,” Carroll said. “[Security] also checked the street conditions, where we contacted the New York City Emergency Management Office. We also followed the news media and television stations on the weather conditions. It is important for us to pay attention to all possibilities.”

The school closings prompted Fordham to change a couple of reading days, May 2 and May 5, into class days. The current first day of finals, May 6, was also switched into a reading day.

According to Dean of FCLC, Rev. Robert R. Grimes, S.J., Fordham reacted to the snow days the same way as when classes were canceled for five days due to Hurricane Sandy in the fall 2013 semester.

“Basically, when we saw that Fordham was closed for four days, it seems to work pretty well with the semester of Sandy; we did the same thing [as the semester with Sandy], but with a couple of minor adjustments,” Grimes said.

“I spoke to a couple of students, and they were fine with the switch,” Grimes said. “I think people would have been much happier with [the extra classes] than if we took days out of spring break; another thing we could have done is take away days from Easter break.”

According to students, many of the snow days were unnecessary. “I think for my commute, personally, a lot of [the snow days] were unnecessary. But I can see how, with many people commuting from so many different places, it could be a hard decision to make,” Emily Stone, FCLC ’16, said. “We probably had too many snow days.”

“I think most of the MTA trains were running perfectly fine, and half of the students at Lincoln Center don’t even commute” Ana Maria Glavan, FCLC ’16, said.

Moreover, students criticized Fordham for having more snow days than many of the other New York City colleges and universities. “Compared to other New York City schools like Columbia University and New York University, if they stay open, then I don’t understand why [Fordham] we couldn’t,” Amanda Blackhorn, FCLC ’16, said.

In addition, some students were unhappy that the University decided to replace the reading days with class days.

“The consequence of closing the school for four days is taking away the reading days,” Blackhorn said. “It’s weird- [the school schedules] goes from class then straight into finals. The whole point of having reading days is for [students] to prepare for finals.”

“All of our finals are around the same time. Now our finals dates are closer together, and we’re going to have less time to prepare for them,” Glavan said.

However, some thought that swapping the reading and class days were fair. “I would like to make up some of the lost class time the snow days took away,” Stone said.

“I think it is unfortunate that [Fordham] had to close as they did. I think it is understandable. Remember, this is a university that is dependent on intercampus transportation, and there is a huge commuter population,” Daniel Ott, assistant professor of art history and music, said. “We had a terrible winter, and this is what happens.”