Fordham Talent, From Stage to Screen in “B.F.F.s” 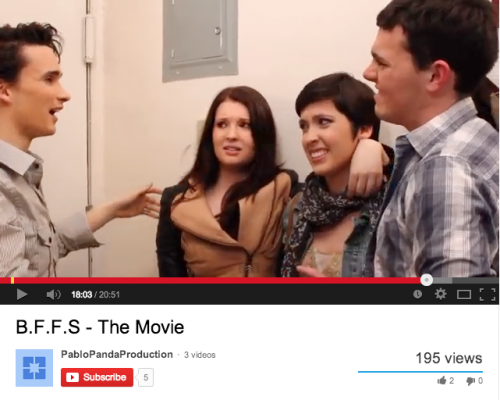 He doesn’t even go here. “Every time I come back to visit, that’s all I hear,” Gregg Ellson, Fordham College at Lincoln Center (FCLC) ’13, said.

If you’re a theatre major, there’s a good chance you know Ellson, either from theater parties on the weekends or from having been cast in a studio or mainstage show with him. If you’re not, you might have seen him on stage at Pope Auditorium, playing the Duke in Fordham Theatre Program’s mainstage production “Measure for Measure” by William Shakespeare in the spring of 2013.

If you don’t know him, you should now know him as the guy who wrote, directed and starred in “B.F.F.s.”

What’s remarkable about the film is that it features only Fordham talent. “Every single one of the cast members and most of the crew were all theatre majors or related to theater in some regard,” Ellson said. Ellson plays Alan, the film’s central character. Victoria Oliver, FCLC’ 15, plays Kristen, Alan’s ex-girlfriend, while Dylan Ungaretta, FCLC’ 15, plays Joey, Alan’s slightly out-of-touch best friend. Caitlin Ronan, FCLC’ 15, plays Danielle, Kristen’s best friend.

Written over Ellson’s winter break between the fall and spring semester of his senior year, “B.F.F.s” was filmed over a span of three weeks. Where did Ellson draw the inspiration for “B.F.F.s?” Just going to college, he said.  “There’s always some good gossip from a party, from a weekend or whatever. That’s half the fun of going to college.” He also drew on personal experiences from his previous relationships, as well as those of his friends’.

The cast found it easy to draw from their own experiences to inhibit these characters. “The four of us are just very good friends, who have been in very similar situations over the course of our friendship. It was funny, reading the script for the very first time and just feeling like we were these characters already,” Ronan said.

“Victoria, Dylan and I all auditioned back-to-back and we were just sitting outside the audition room talking about how this is a movie about us,” Ronan said. “These people are us. I guess Gregg agreed. “

“A lot of us had actually lived something somewhat similar, but I had never written that with us in mind,” Ellson said.

Released on Saturday, Feb 8, the reception for the film has been positive. “It’s been a long time in the whole process of it because we filmed it last year, just about a year ago,” Ronan said. “It’s been a while coming, but everyone that I talked to about it has really enjoyed it so that’s really exciting.”

Work on “B.F.F.s” isn’t over yet: the film will follow Alan and Danielle in a web series. The idea was sparked in Ellson’s mind when Ronan sent him a text message while watching the film with her roommates. “I texted Gregg, ‘Hey Gregg, this would make a great web series!’ and he was like ‘Start writing episodes,’’ Ronan said.

“It’s invaluable,” Ellson said, of his experience at FCLC and the theatre program, in particular. “I cannot possibly speak highly enough of everything that I’ve learned and experienced in the past four years at Fordham.” Classes that Ellson was able to take gave him “a safety net to strike out and try things and to fail and to still have that community there to help you get back up on your feet and continue to try.”

Since graduation, Ellson has been “doing the typical survival job of working at restaurants,” but he continues to audition and put his own work out there. “You’ll never get the work unless you put in a lot of energy,” Ellson said. Sometimes, that means producing your own work. “With the technology we have today and YouTube being a great vehicle to showcase your work, it’s very important for you to continue whatever you need to do.”

With his eyes set on acting and writing on television, Ellson will continue to audition, self-produce and avoid “House of Cards” spoilers. “The most important thing for any artist is to be working.”