The Atlantic 10 is Revamping Its Style 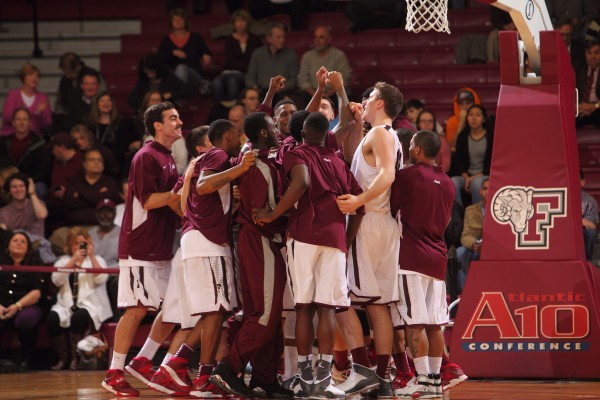 Fordham and the Atlantic 10 are looking to become more prominent in the world of college basketball. (Courtesy of Fordham Sports Info)

The Atlantic 10 (A-10) Basketball Conference, home to Fordham and 13 other member institutions, has revamped its look. The conference has taken a more edgy, in-your-face approach to broadcasting how strong the member schools are both on the court and in the classroom. The brand development of the conference is being managed by an agency called 160over90, which is known for its national campaigns with popular brands.

160over90 usually focuses on more well-known companies and institutions than the A-10. Some of 160over90’s clientele include Nike, Godiva, Under Armour, American Eagle Outfitters, the Philadelphia Eagles and the Los Angeles Angels of Anaheim. The only collegiate institutions that the agency has worked with in the past include big names such as Duke University, the University of California Los Angeles (UCLA) and the University of Notre Dame.

The Chief Creative Officer of 160over90, Darryl Cilli, is excited about the prospect of working alongside Fordham and the rest of the A-10 members. “It’s a privilege to work with the A-10,” Cilli said. “It’s one of the best basketball conferences in the country, and with all of the television coverage, major out-of-conference wins and success in March Madness, people are now recognizing that.”

A-10 Commissioner Bernadette V. McGlade admitted that rebranding of the conference took about a year and was quite challenging. “National branding campaigns are always a challenge, and the A-10 wanted to take a more edgy approach to really showcase how strong of a league we are and how strong of a brand academically and athletically we are,” McGlade said. “We think it’s a fun campaign and we hope everyone enjoys it.”

Over the last two weeks, 160over90’s promotion of the conference has kicked into full gear. There is a two-minute video about the conference that will air during Atlantic 10 games that are broadcasted nationally and regionally. The video takes on a gritty, hardworking attitude and highlights each team in the conference. It will also run at Barclays Center in Brooklyn, which will be venue for the 2014 Atlantic 10 men’s basketball championship.

Additionally, there is a print component of the campaign, but 160over90 is focusing mainly on the social media aspect. Fordham, along with the 12 other members will highlight the “Who Wants Next” campaign on their university and athletic websites. They also promote the campaign on Facebook, Twitter and other social media sites.

Tom Pecora, Fordham’s head coach, received information about the new campaign two months ago. He believes it’s been an incredible recruiting tool for the team. “It’s been tremendous,” Pecora said. “The young people we are recruiting have already seen ads through the course of watching televised games. They’ve responded and reacted to it. So I think it has already had a positive effect on recruiting, especially for us at Fordham.”

One of the phrases in the new campaign is “Winning doesn’t mean losing what we stand for.”  The phrase is meant to showcase that success isn’t just for the court. “I think one of the points that come across is that it is a complete conference, the Atlantic 10. Not only are we producing good basketball, and sports in general, but we’re also producing good student athletes,” Pecora said.