Should The U.S. Get Involved In Ukraine? 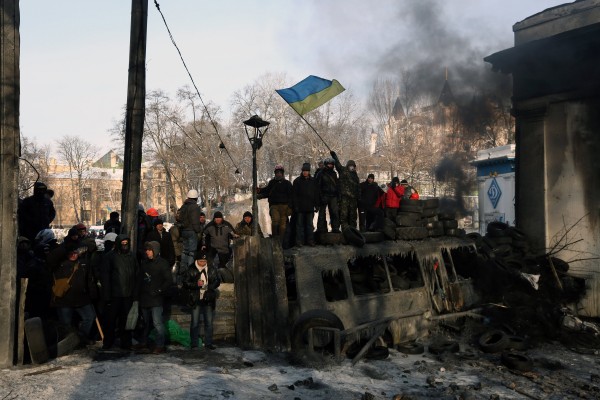 After three months of civil unrest and government oppression, many people worry the crisis in Ukraine has the potential to escalate into an open conflict. Anti-government protestors have taken to the streets in Kiev and other cities, leading to violent clashes with the police in which more than a dozen people have been killed and scores more injured. The main factions are those who seek closer ties with the European Union (EU) and those who seek to preserve Ukraine’s relationship with Russia and support the current government, although a less prominent nationalist pressure that wants neither is also present. Russia, which has recovered considerable geopolitical power and prestige since the disintegration of the Soviet Union, does not want a future in which Ukraine is a part of the European Union. Yet, the EU sees a future for Ukraine in its enlargement program. There is potential for greater conflict should either side choose to exploit the unrest in Ukraine to advance their agenda. Because of Russia’s preeminent position in Eastern Europe, there is little potential for the United States or the EU to get directly involved in the Ukrainian crisis.

Many former Soviet republics and Warsaw Pact members have joined the EU—Poland, the Baltic countries, Bulgaria and Romania to name a few—leaving Moscow with fewer and fewer former vassals to align with politically or integrate with economically. Unless the EU disintegrates, these countries are unlikely to return to Russia’s sphere of influence. Moscow is not ignorant of the trends shaping the future of Europe and seeks to form its own ‘Eurasian Union,’ which neighboring Belarus and Kazakhstan have signed on for. The Russians have not been unwilling to use force to maintain their sphere of influence either, having invaded Georgia in 2008. They also possess military bases in Ukraine, the most important of which is Sebastopol in the Black Sea.

Military action does not seem likely at the moment in Ukraine, as both the EU and Russia have preferred to pursue the financial tract of diplomacy. Both sides have denied that they are in a “bidding war” for the allegiance of Ukraine, but there is no altruism in geopolitics. After the Ukrainian government backed out of a deal with the EU, Moscow offered loans worth $15 billion. Only $3 billion have been doled out as Russia has suspended payments because of the Ukrainian government’s inability to contain and disperse the protestors. However, the EU is still willing to offer aid of their own.

More important than any monetary offers made by either side, however, will be the Russian control of energy supply and infrastructure in much of Eastern Europe. About a quarter of the natural gas consumed in the EU comes from Russia, and 80 percent of that passes through pipelines in Ukraine. Moscow has not hesitated to use this as leverage before, and should a Ukrainian government move too close to the EU, such a policy would be likely to resurface. In 2009, the gas supply was greatly disrupted in 18 European countries because of a dispute between Russia and Ukraine over the latter’s debt. Russia’s natural gas reserves may prove to be its greatest weapon in this struggle.

At this point in the Ukrainian crisis, any sort of intervention would have to be entirely speculative. Certainly the EU or the US cannot engage in direct conflict with Russia, as all possess nuclear arsenals. Nor should either side seek to escalate the civil unrest in Ukraine to the point of open conflict. Should the situation in Ukraine deteriorate into civil war, which doesn’t seem too far-fetched, given the continuing clashes in Kiev between police and protestors, not to mention the ousting of President Viktor Yanukovych by the Ukrainian Parliament on Feb. 22, the potential to back a faction  both militarily and financially would emerge. Logistically, the Russians would have an immense advantage, as they would be supporting forces in a neighboring country of shared cultural background and controlling the energy supply.

I do not think diplomatic action under current conditions would be very useful either. Neither the US nor the EU is in any position to be impartial to this dispute, and Moscow holds most of the cards, with the financial, military and resource-strategic advantages over Ukraine. With the legitimacy of the Ukrainian government eroded, holding free elections and appointing a transitional administration are necessary prerequisites to any negotiations between Ukraine and Russia.

Level heads must prevail and avoid provoking greater conflict in Ukraine. Ideally, Ukraine ought to be free to determine their country’s future in a democratic way, but there are geopolitical forces at work here which they cannot control. Russia and Ukraine have a long history together and a shared heritage which the Western powers cannot ignore, but Ukraine should be allowed to renegotiate their relationship with Russia, and the future of their country, on their own terms.