Felony Disenfranchisement: Should We Still Have It? 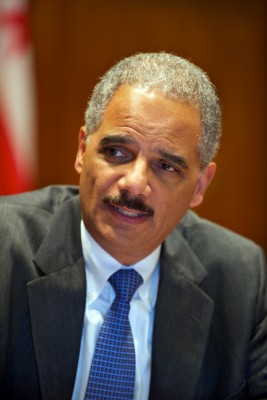 The debate over whether or not felony disenfranchisement laws should remain in place was rekindled on Tuesday, Feb. 11, following a speech given by Attorney General Eric H. Holder Jr. at Georgetown University. In this speech, Holder called upon states to repeal laws that prohibit felons from voting following their release from prison, stating that these laws not only make it more difficult for felons to reintegrate into society, but they are also part of an outdated system used by the Old South during the Reconstruction period, designed to keep blacks disenfranchised. According to an article by Adam Goldman for the Washington Post, “[Holder’s] appeal is part of a broader effort underway by the Justice Department to overhaul the criminal justice system, which U.S. officials say often treats minority groups unfairly.” Another article in The New York Times, written in support of Holder’s push, claims that due to disenfranchisement laws, 1 in 5 African Americans across Florida, Kentucky and Virginia are left unable to vote.

I’m all for supporting a serious revision of these laws, but when did this become a civil rights issue? It’s one thing to note that roughly 38 percent of today’s disenfranchised felons are black, but it’s another thing entirely to affiliate the reason they cannot vote with the Old South. The implication Holder has made is that disenfranchisement laws are effectively racist, and this notion is just ridiculous. In fact, it’s downright despicable.

By referring to the number of blacks in the United States that are no longer able to vote due to these disenfranchisement laws, Holder paints himself as a champion for civil rights in a matter that needn’t involve race. Disenfranchisement laws are not the ones putting African Americans in prison and turning them into felons in the first place, and if Holder was so preoccupied with a matter of civil rights, one would think that he would be far more interested in reducing rates of crime perpetrated by African Americans rather than zeroing in on the punishment. He could look at Florida, one of the states that have been spotlighted due to its large population of African Americans and see that in the period between 2008 and 2012, there was an estimated 15.6 percent of the population that lived at or below the poverty level and then call for social or economic reform. Instead, he plays the race card because it is sure to elicit a far more powerful response, and the elephant in the room is ignored yet again to the misfortune of those who are forced to suffer with it in silence.

I’m not saying that Holder is entirely off his mark, and it’s certainly unfortunate that such a large number of blacks in this country are denied the vote. While I believe disenfranchisement laws are worth reforming, they should be done in light of what they say about our justice system as a whole, rather than for reasons pertaining to race. The real reason we’ve had these disenfranchisement laws is not because we wanted to continue the racist policies of the South, but because we’ve been preoccupied with the concept of recidivism: the returning of a criminal to acts of crime even after incarceration.

One of the most popular experiments of recidivism was conducted by Sheldon and Eleanor Glueck, who in 1921 and 1922 dutifully followed 510 prisoners after they were released from the Massachusetts Reformatory. They would later report that nearly 80 percent of the subjects had not been rehabilitated. Fast forward to 1994, and we get the U.S. Department of Justice reporting that, of a sample of 272,111 released convicts, roughly 67.5 percent were rearrested within three years. Because of this lingering potential for an ex-felon to return to his law-breaking ways, we’ve been hesitant to grant them the power to make good decisions regarding our political and societal infrastructure. The ironic thing is that recent evidence shows that this hesitancy may be exacerbating the problem, for they preclude the possibility of full reintegration into society from the beginning. The New York Times article reiterates Holder’s observation that “formerly incarcerated people banned from voting were three times as likely to re-offend as those who were allowed to vote.”

But here’s what it ultimately boils down to: the right to vote should go hand-in-hand with our confidence in our system of rehabilitation. When we incarcerate felons, we do so to either rehabilitate them or to remove them from society completely. Life sentences and death penalties accomplish the latter purpose, whereas shorter sentences and institutionalization are meant to serve the former. We shouldn’t put convicts back on the street unless we are reasonably confident that they have been rehabilitated and are therefore unlikely to commit a comparable offense in the future. Yet, if we withhold the ability to vote from them, we’re effectively saying something along the lines of ‘I only half-trust you to make good decisions for society,’ which means that we don’t believe in the system. Many states are enacting laws that gradually re-enfranchise felons convicted of lesser offenses, and I am inclined to believe that this is the way to go. If they have done their time and come out better for it, then by all means, give them the vote regardless of whether they’re white, black, yellow, red or turquoise. But if we’re denying the vote to such a large group because we don’t trust them, then let’s start addressing the problem by first only putting people we trust back on the streets—the community will be much safer for it.