Does Watching a Woody Allen Film Make Us Rapist Sympathizers? 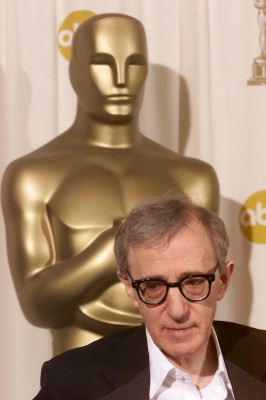 Twenty years after she accused Woody Allen of sexual assault, Dylan Farrow has spoken up about her adoptive father and has shared her experiences through a letter published in the New York Times. She begins by simply asking the question: “What’s your favorite Woody Allen movie?” and goes on to write about the abuse she suffered while living with him. Farrow claims that Allen would find ways to be alone with her and then would proceed to touch her in a highly inappropriate manner: he was so tactical about it that no one found out until she told her mother, Mia Farrow, when she was seven years old. The revelation resulted in a lawsuit and charges that were later dropped, although the allegations did not go unnoticed. The media quickly covered the story with varying opinions on whether or not Woody Allen was actually guilty. Although this should have hindered his popularity, to this day Allen continues to be celebrated for his achievements in film and is considered a genius in the industry. This year, he received an award for lifetime achievement at the Golden Globes and was nominated for an Oscar.

While it’s true that Woody Allen has proven his immense talent and has managed to captivate viewers and critics alike, are we rapist sympathizers when we revere his work or watch his films? It seems as if we are forgetting and ignoring what he did to the girl who saw him as a father figure. Although some completely dismiss the accusations, some argue that Woody Allen the film maker and Woody Allen the person are completely different entities and should be treated as such. Yet when you think about it, that same mind that made all of those iconic films is the same mind that decided to molest a defenseless girl. Not only that, but the private life of an artist tends to influence the art that he creates.

Yet some people are more inclined to defend him even though he has displayed a tendency to be interested in young women. One clear example is his current wife, Soon Yi, another one of Mia Farrow’s adoptive daughters. Allen was already 56 when his relationship to the 21-year-old was revealed in 1992, and it was rumored that their relationship had actually started much earlier than that. Now take a look at his 1979 film “Manhattan,” in which his 42-year-old character dates a 17-year-old: the film might have been released much earlier than the various scandals he has played a main role in, but looking back on it, the film does reveal his indifference to age when it comes to relationships and sex. Whatever your interpretations of his films are, just keep in mind that Woody Allen is one person, not two separate ones. If we decide to watch and praise his films, we are, at the same time, praising him and giving him our support—when that’s the last place it should be.

Although there is speculation about the truth of Farrow’s accusations against the famous director/writer/actor, as she has been accused of being manipulated by her mother to fabricate them in order to get revenge on Woody Allen for leaving her for her other daughter, Soon Yi, Farrow insists that her memories are her own and refuses to stay silent on the matter—and the genuine nature of her letter should shed light on the fact that these accusations are almost certainly true. Woody Allen may not have been convicted, but we know all too well how easily celebrities can extricate themselves from ‘nasty legal situations’ (i.e. Chris Brown, Justin Bieber), and the evidence against him is too much to ignore. However, despite the psychological pain and the abuse Farrow suffered at his hands, people continue to view Allen as an influence and role model in the film industry.

Sure every star is entitled to a private life but how can the public just brush off the rape of a 7-year-old girl? Our society celebrates this man because of his art, but when did art become more important to the public than the mental state of a rape victim? This definitely should not be the case. Of course, we cannot un-watch any Woody Allen film we have ever seen, but we can refuse to watch future movies. It will not change what has already transpired, but it will make a statement about we personally value the most.

Put yourself in the shoes of the victim and imagine seeing the same face that caused you so much pain included in a montage for achievement with people clapping for it. No person should ever have to go through that for the sake of art.