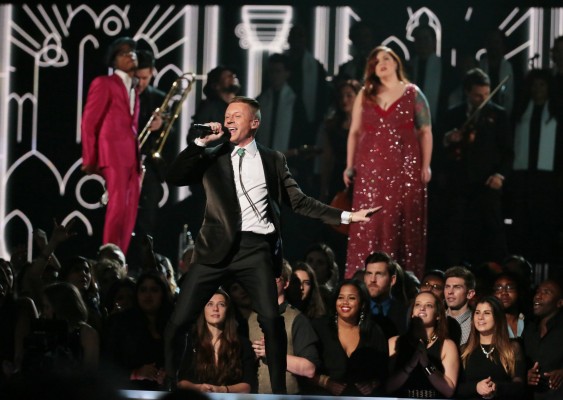 During the 2014 Grammy Awards, Macklemore decided to make a statement during a performance by staging a wedding ceremony during which music and film star Queen Latifah married 33 couples, many of them of the same sex. The rapper performed “Same Love,”a rap ode to justice for LGBT people. However, for me, and many others, the whole spectacle is just that—a spectacle. It seems that Macklemore (born Ben Haggerty) is never far from controversy. After all, he’s a straight white man in a genre pioneered by black artists who acts as a voice for LGBT people. But many of these same people have spoken out about this—and not everything they’ve had to say has been positive. Kirk Cameron called the marriage ceremony a sign of America’s downfall, but I think that’s giving it a bit too much credit.

Gay rapper Le1f, who denounced the Macklemore song “Thrift Shop” on Twitter because it used a beat extremely similar to Le1f’s song “Wut,” also tackled “Same Love” head on, accusing Macklemore of profiting off the struggles of the LGBT community. “I’m gonna write a song about disabled people, or about the aboriginal struggle,” he tweeted, “cuz mama needs a new fur coat. oh wait, that’s evil.” The idea of straight, cisgender voices speaking over LGBT voices isn’t new, and it’s a problem their community has been taking notice of for a long while now.

And when Macklemore acts as if marriage is the only issue plaguing this community, well, that’s even more of a problem. Marriage equality is important but there are so many more serious issues intertwined with homophobia and transphobia. The issues of LGBT youth homelessness, suicide rates, beatings and murders are as prevalent as ever—marriage equality is only the tip of the iceberg when it comes to LGBT issues. When Macklemore took the stage at the Grammys, proclaiming that everyone is the same and holding a marriage ceremony for both heterosexual and homosexual couples at a public and televised event, it felt somewhat gimmicky. The fact is that we’re not all the same; we all come from different races and have different sexualities and gender identities. Accepting the idea that everyone is the same instead of recognizing each person’s own unique differences and loving them all the more for it seems a bit lackluster to me. Macklemore, as a straight man, most likely does not know how it feels to face homophobia daily. It is not a problem that can simply be solved with marriage equality—that’s only square one.

The fact of the matter is, Macklemore is making money off “Same Love,” and by extension, off of the LGBT struggle. His actions speak louder than lyrics about casually homophobic YouTube comments and reassuring us that he is, in fact, not gay himself (as if he’s insecure for some reason). While it seems admirable on paper, many of the things he does indicate a lack of awareness. Maybe it’s when he felt the need to use a slur to make his point in the song. Maybe it’s when he didn’t yet apologize for the tweets he made in the past using phrases like “no homo” and slurs like “dykes.” Maybe it’s when he used the Grammys as a main stage to shrink a human rights issue into something more attractive to the public eye than, say, the amount of LGBT people murdered in hate crimes. Either way, he’s further perpetuating a notion that oversimplifies and cheapens the gay rights movement.

The Grammys ceremony was nice gesture at face value, but I’m not convinced. Sorry, Ben.