Horns of Calamity: The State of Pedestrian Safety in NYC 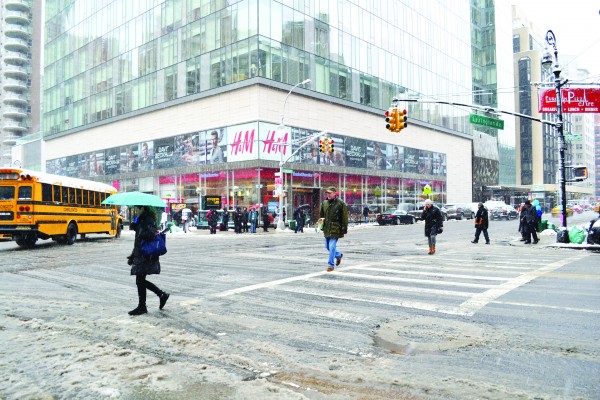 It has yet to be a full month since New York City Mayor Bill de Blasio has taken his new office, but he already has begun an aggressive push towards eliminating pedestrian fatalities on the streets of Manhattan. Following the tragic deaths of 73-year-old Alexander Shear and 9-year-old Cooper Stock, a 26-year-old doctor by the name of Samantha Lee was clipped by an ambulance and shortly afterward, fatally struck by a Dodge Charger while crossing the 96th street midblock on the morning of Sunday, Jan. 19, 2014. Since this latest incident, New York Police Department (NYPD) officers have been on a vigilant watch for jaywalkers and have issued numerous citations for any violations. This has left many pedestrians feeling victimized and upset, and they are now clamoring for a revisal of de Blasio’s approach. Such critics would claim the existing approach is nothing more than an overly ambitious and ultimately futile effort that unfairly shifts the blame for the city’s fatal accidents to the pedestrians when it should be placed on the drivers.

It is one thing to be overly ambitious, but that does not necessarily discredit any possible benefit of the approach. It seems to me that inconveniencing a few pedestrians is a small price to pay to reduce the recent series of fatalities that are, in fact, linked to New York’s jaywalking problem.

Don’t get me wrong, de Blasio’s goal of “zero fatalities” is about as plausible as George H. W. Bush’s claim of “no new taxes” was, and it is clear to me that this is just another pet project designed to give the impression that the mayor is actually doing something for the betterment of the lives of Manhattan’s citizens rather than sitting in a chair and twiddling his thumbs. This is exactly what Michael Bloomberg did during his “crusade” against the consumption of large sugary drinks, and that wasn’t well-received either.

But regardless of whether or not de Blasio’s version of the Bloomberg crusade was initiated as part of a desire for personal glory, he isn’t exactly overstepping his bounds here. Jaywalking has always been a misdemeanor, and it has always put people’s lives at risk. This time around, citizens aren’t up in arms over a restriction of their rights, as the proposal to ban large-size sodas was, but rather they are upset over a restriction of something they never had the right to do in the first place.

New York is a cold place in more than one sense of the word. Sympathy or respect from other pedestrians has always been in short supply, and the ultimate root of these mishaps between pedestrians and automobiles is the fact that at least one participant believed that his time was more valuable than the other’s. When a pedestrian dashes across the middle of a street, causing oncoming traffic to slow down or halt, he does so because the only thing he cares about is getting to the other side in a timely manner without any regard for the inconvenience he has now caused the oncoming automobiles. In a similar fashion, an automobile operator would refuse to slow down for a pedestrian in the middle of the road because he believes his time is more valuable and therefore it is imperative to get from point A to point B in as little time as possible rather than wait however long it takes for the obstructing pedestrian to get to safety. This egocentric behavior is what is causing these fatalities, and jaywalking only serves to perpetuate it.

I don’t think automobiles should be off the hook either, but this push against jaywalking doesn’t just keep people out of the danger zone where they don’t belong, it also forces us to respect each other’s time. The chicken may cross the road if he so desires, but please allow the car to carry its business out as well.